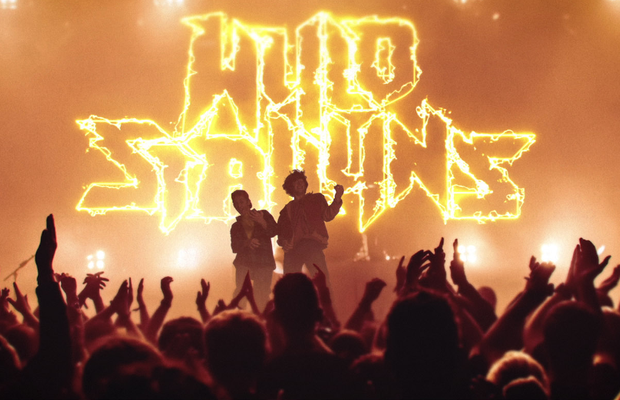 The stakes are higher than ever for the time-traveling exploits of William ‘Bill’ S. Preston Esq. and Theodore ‘Ted’ Logan. Yet to fulfil their rock and roll destiny, the now middle-aged best friends set out on a new adventure when a visitor from the future warns them that only their song can save life as we know it. Along the way, they will be helped by their daughters, a new batch of historical figures, and a few music legends — to seek the song that will set their world right and bring harmony in the universe.

Created by Emmy award-winning directors, Karin Fong and Grant Lau, Imaginary Forces designed the main and end titles for ‘Bill & Ted Face the Music’. For the title sequence IF was tasked with helping develop the story to introduce the movie, setting the stage and showing the band’s journey since the last movie, which was nearly 20 years ago since it was first released. While working remotely, the IF team took inspiration from documentary series and delved into iconic 90s music scenes by creating album artwork that felt very much of the time, and also served as a source that shows the audience how the Wyld Stallyns’ music style progressively changed over the years.

“Over the years we’ve had the honour or working on premium documentaries for some of music’s most illustrious personalities, but nothing was like this challenge of creating an opening montage for the likes of ‘Bill & Ted Face The Music’. Together with the filmmakers, we asked ourselves how we could make a sequence that feels real and true to their musical journey - something as authentic as any music doc out there. And so began a most excellent journey into the treasure trove of pop culture that is the 90s to the present, designing everything from album art to articles to answer the question that we all want answered: Where Are They Now?” Karin Fong, creative director, Imaginary Forces.

‘It was an incredible experience to collaborate with the creators of two such iconic characters, 20 years later. As the actors have evolved over the years, the challenge was to create historical moments that would make up the reality for Bill & Ted since the last film ‘Bill & Ted’s Bogus Journey’. We worked closely with the writers from the first two, now cult films, and as a fan, it was the most bodacious adventure!” Grant Lau, creative director, Imaginary Forces.

Designed & Produced by: Imaginary Forces (IF)