Karin Fong presents the rapper as an action figure being manufactured in a lab for 'Supervillain: The Making of Tekashi 6ix9ine' 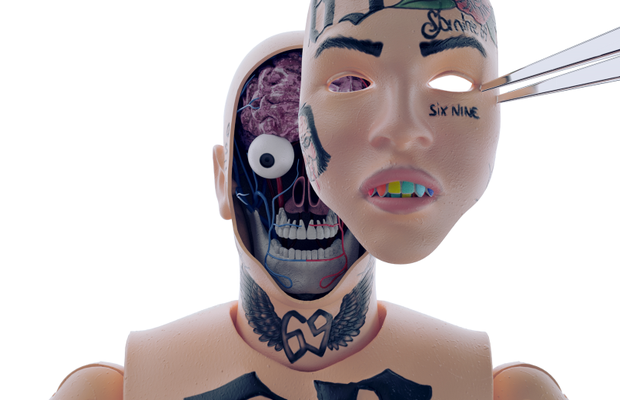 Imaginary Forces (IF) created the opening title sequence and interstitials for director Karam Gill’s Supervillain: The Making of Tekashi 6ix9ine, a new three-part docuseries streaming exclusively on Showtime. Based on Rolling Stone’s feature on Tekashi 6ix9ine, 'The Rise and Fall of a Hip-Hop Supervillain', the series traces the wild and controversial story of Daniel Hernandez, the Brooklyn native who used social media to transform himself into a hip-hop phenomenon.

Gill and executive producer Peter J. Scalettar tapped Imaginary Forces director Karin Fong to create an array of mixed-media vignettes for the titles and the 'Elements of a Supervillain' interstitials. The segments present Tekashi 6ix9ine as an action figure being manipulated with precision by anonymous hands - and a volatile mix of chemistry - until Tekashi 6ix9ine takes over control. Imaginary Forces produced several unique interstitials for each episode, each focusing on a different 'supervillain' factor, such as Appearance, Trauma, Ego, and Weaponry.

“What attracted me to the film was Karam‘s darkly funny concept of Tekashi being produced in a lab - how the sum of all these parts added up to his toxic fame,” says Fong. “It was a bold move to interweave the documentary with such a strong visual metaphor. A hyper-calculated experiment gone awry - that’s a pretty great starting point! First, we imagined how the rapper would be constructed as an action figure upon a light table. From there, we could run with all the ways that idea could be exploited to tell the story.”

“From the beginning, this project was about exploring the concept of manufactured celebrity and how our society enables this type of inauthenticity to thrive,” says Gill. “The use of the lab was something that really brought these ideas to life and working with Karin and her team was incredible. She is someone who truly looks to understand the larger purpose/vision and then brings ideas forward that take everything to another level. Collaborating with her and the Imaginary Forces team really made the show have such precise attention to detail and pure magic.”

Imaginary Forces employed a mix of live-action, practical effects, and CG animation to depict a stylized and consistent point of view. Shot from above, the custom action figure was placed on a light table and 'operated' upon. The light table also served as a visual device for incorporating pop culture references, such as film clips from Joker and Star Wars, and media footage, as well as props related to the idea of villainy, such as weaponry, forensic kits, and legal papers.

“This is about the making of a monster, so Karam encouraged us to get dark and unsettling with it,” says Fong. “We deliberately contrasted the grittiness of the doc with visuals that are clean and modern, using Tekashi’s signature rainbow palette and moving at a relentless pace that is reflective of his roller coaster of life experiences – from his early life to celebrity life to gang life and prison.”

To tease out the concept with the main title sequence, Fong and company introduced the lab metaphor with live-action and practical effects. The team mixed, crafted, and sculpted props and materials for the sequence – from the pristine to the grotesque.

“When Karam came to me with the ideas for these interstitials, I knew we needed to work with a team of next-level creatives and thinkers,” says Scalettar. “I’ve been a fan of IF’s work for years, so it was a perfect pairing.”

“We love when filmmakers like Karam and Peter bring us on board as a creative partner to augment storytelling in untraditional ways,” concludes Fong. “Karam’s audacious vision for the interstitials elevated the film in a powerful way and we hope it paves the way for more projects with the same level of risk and reward.”

All three episodes of Supervillain: The Making of Tekashi 6ix9ine are available on Showtime.

Main Title Sequence and “Elements of a Supervillain” Interstitials

The Work That Made Me: Peter Frankfurt