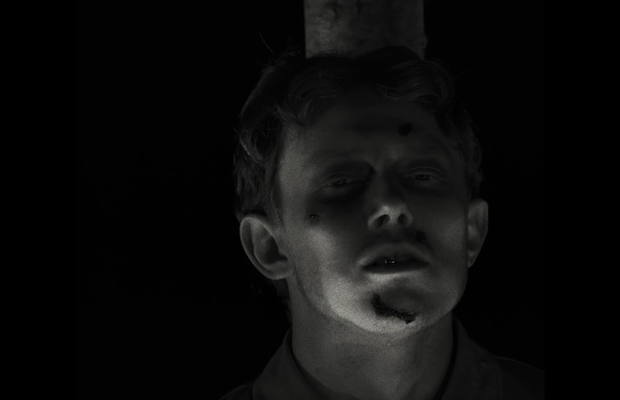 In this promo for his new track '(Don't Let The Dragon) Draag On', King Krule gets burnt at the stake. Admittedly, it was for narrative effect but it was all in fact the musician's decision. Real name Archy Marshall, King Krule was keen to make this film his first ever self-directed music video. The end result is a meticulously produced piece of black and white filmmaking that took an intense amount of planning and camera skill. That job landed at the feet of production company Ground Work, who Archy specifically wanted to work with on the project.

LBB> Why were you keen to work with King Krule? How did this job initially come about?

Aaron> King Krule (Archy Marshall) came to us with a really strong vision and was keen to make this his first self-directed music video. We've worked together previously as I produced his video for Biscuit Town, directed by CC Wade. Off the back of the success of that video, XL and Archy wanted to collaborate again. We’re huge fans of his music and he’s got a great back catalogue of inventive and well crafted videos, so the chance to add to that lineage was a no brainer for Ground Work.

LBB> Tell us about Archy's concept for the film - what initial thoughts did you have?

Aaron> The song, lyrics and the video are very personal to Archy and he came to us with a fully developed concept. But translating that concept into the final video threw up a lot of technical challenges that we worked through together. To be seamless to the viewer, sometimes the seemingly simplest ideas need complex solutions elegantly executed.

The two key challenges were not burning the director alive and getting from an ultra closeup of Archy’s eye to a huge wide in a single take.

We felt the best way to safely burn Archy at the stake was to use motion control and film the video in two takes, one for performance and another for SFX, then compositing the images together in post. But Archy’s storyboards had such a big range from the opening to the final shot that it ruled out virtually every motion control system, especially when shooting on location in a muddy field in winter.

So we used a combination of techniques to get the camera move right and match it exactly to Archy’s storyboards. We used a Titan X motion control rig, which is the largest in the world with a seven-metre telescopic crane arm as well as a 10-metre track, rigged with a 24-290mm zoom to achieve the camera move. But even with that range, it wasn’t quite enough. The closest focus we could achieve on the lens meant that we couldn’t get near enough to Archy’s face to capture the ultra close of his eye. So we shot at 8k, easing in with a digital zoom from a 4k crop at the start of the video.

It was something we really enjoyed problem solving and was great to see everything come together so smoothly on the day.

LBB> With regards to narrative, what's happening? Why did you opt to shoot in black and white?

Aaron> As above, Archy came to us with a fully formed concept, but I think what's occurring in the video is less a straight narrative and more a reflection of Archy’s state of mind in the song. There is a darkness and claustrophobia both musically and lyrically, so being tied to the stake in impending peril feels like an apt visual representation of the song. There’s a healthy dose of ambiguity and a deliberate mixing of eras in terms of the characters and costume in order to heighten the sense of it being a dreamlike occurrence.

So these themes naturally leant themselves to shooting in black and white and Archy shared some great references in our early conversations. The key one was The Passion of Joan of Arc, a 1928 film directed by Carl Theodor Dreyer.

LBB> How did you achieve that almost negative look to the white features against the black background?

Spike> We set our sights on a high contrast B&W look early on, with Archy keen for the edges of the scene to fall off to black quite abstractly, so the inky feel of push developed Kodak DoubleX stock came to my mind early on.

I chose to shoot digital on this one due to the macro nature of the opening frame and the VFX requirements in post production, but the film references informed the way we captured the scene digitally, including rating the camera at a low ISO to push the dynamic range into the highlights, producing crunchier shadows, and monitoring using a B&W LUT which let more luminance through the red channel.

On the night I also shot a 100’ roll of the scene on DoubleX which helped guide us in the grade as a reference towards our pushed B&W 16mm look.

LBB> What other aims and inspirations did you have from an aesthetics point of view?

Spike> Apart from getting the quite technically challenging macro-to-wide camera move right, I wanted to focus on getting the lighting effects on Archy’s face right, which we achieved with 30 small lamps surrounding him and a flame nearby to create the reflection in his eye.

Once we got the performance take in the can, the take with the knights and the burning pyre was illuminated primarily by the fire itself and just a tiny bit of fill bouncing back in. We had other lights on standby but it was very satisfying to save them and shoot it naturally.

The Work That Made Me: William Child