Wil Boudreau, founder of Boudreau Advertising, was struggling to win work because he had no new work to showcase - until he created ‘The Many Meanderings of the First Gen X Man’ 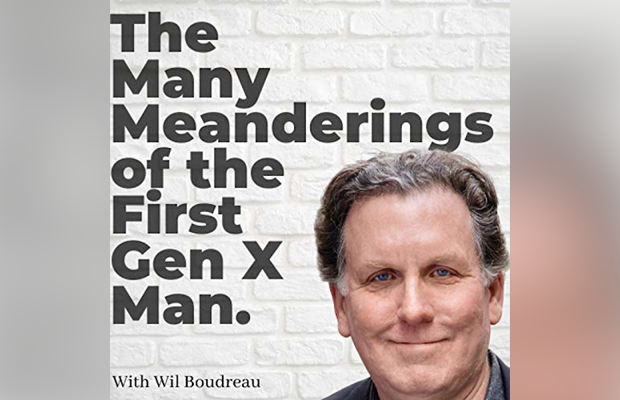 Wil Boudreau has a podcast called ‘The Many Meanderings of the First Gen X Man’. It’s basically him telling the funniest stories from his life as a kid, in the 1970s, as a ‘mad man’ for two decades and now as a husband and dad of four sons. The cheeky catch, though, is that it’s a stealth way to showcase his writing and storytelling skills to current and prospective clients of his virtual agency Boudreau Advertising. It’s emailable, social media friendly, able to be broken up into tiny bits of content and really, really fun. And, to quote Wil, “it’s proven to be an invaluable tool to keep current and prospective clients engaged (and smiling)”. He’s had more than one new client tell him that they’re diehard fans, which is really kinda awesome.
We thought it would be fun to pick his brains on how - and why - he did it.

“The initial problem was I wasn’t getting enough work for my new startup virtual agency. I didn’t have any assignments or exciting new agency work to showcase.  So I created ‘news’ by going back into my past and turning it into a podcast.”

“I was inspired by autobiographical writers like Jean Shepherd, Neil Simon and Spalding Gray. I’ve always been fascinated by how universal extremely personal stories can be. I wasn’t exactly sure what form the podcast should take; I just knew I wanted it to be scripted and performed by me - not a free-flowing unscripted interview format that most podcasts seem to follow.”

“The main stumbling block was I needed some equipment, mainly a microphone and accessories, which I was able to easily acquire online for under $200. Then I needed to teach myself how to record and edit using GarageBand, which I was able to figure out thanks to the intuitive nature of Apple UX design and of course the endless universe of YouTube tutorials.
“I thought the job would be essentially done once I had a script written. And while this is a major hurdle, I realised that production was going to be a major part of the creative process. I instinctively began to move from a pure spoken word format to more of a radio theatre experience, using sound design and music to establish mood, heighten tension, amplify comedic moments and create the proper emotional journey around each story.  I wound up subscribing to a stock music and sound effects site that is extremely reasonable.
“This post production work took much longer than I anticipated, but also became something I genuinely enjoyed. Finding the right sound effect for a funny scene or the right music track for a tender moment became rewarding in and of itself. I was creating mini audio movies. How cool is that?”

“After the first episode, I was completely spent. I literally couldn’t think of another story to tell.  My life hasn’t been that interesting. That was it; that was all I’ve got, exactly 26 minutes of interesting stories and commentary. But then after about a week, I wrote a sentence of Episode Two, then another, then another... I’d trick myself into writing by telling myself, ‘I’m not going to write, I’m just going to read through what I’ve written so far.’ This would always lead to me having more ideas once I got going.
“I learned after I wrote ‘Being Sixteen in 1981 and 2020’ that staying focused on one subject for an entire episode was more successful. It was easier to follow and allowed the audience to stay  engaged with the same story for the entire episode.  It proved to be one of my most popular episodes and I’ve been going with the single topic format ever since.
"Feedback via comments on my social media feeds helps me decide what to do for future episodes. It also helps me determine the things people are really responding to. Thus far, the commentary has been positive around the funniness, my voice (I apparently give good microphone) and my use of music. I’ve been astonished at the quality of stock music that’s available for podcasters."
Check out ‘The Many Meanderings of the First Gen X Man’ yourself here.