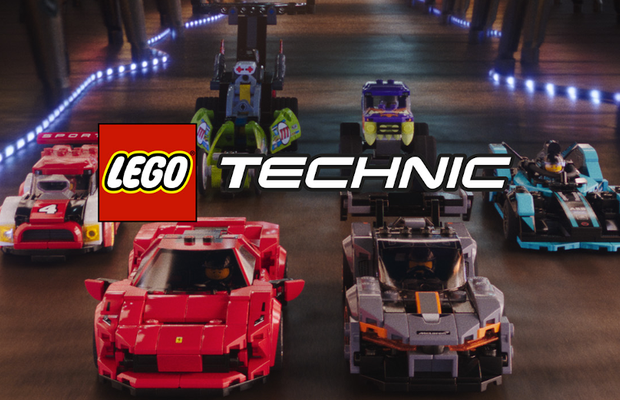 Production company HighlyUnlikely received challenging production brief from The LEGO Agency for a brand spot capturing the world of LEGO cars as imagined through the eyes of a child, exploring multiple ways of tackling the technical execution.

Initially, the team considered flipping the CG and Live Action mix by shooting real cars on a track and comping them into a full CG environment, but with a wide mix of vehicles required (including a Formula-E, monster truck and LEGOGT car with no real-world equivalent) this proved to be unworkable solution. Instead, the production team decided on a mixture of live-action footage, with cars shot in a studio, a house and within live-action environments, alongside full-CG builds (commissioned from Framestore) of all of the vehicles.

The HighlyUnlikely production team, led by director David Mellor, worked very closely with DOP Jordan Buck and the CG team to ensure every shot would match in exactly the right way.

David Mellor, director, HighlyUnlikely said: “This was a dream project, and the passion I had for it shows in the final result. I was able to draw on all my experiences to orchestrate an epic adventure here, which for a brief moment takes us out of reality. Planning was key due to the very technical nature of the task. I knew that ensuring we consider all the aspects through to finish would in turn build the smoothest and best result for the film. Getting all of the details in order ultimately meant we can focus on the fun and action. It allowed our inner child, and petrol head, to come out and play. Something certainly needed on occasion at the moment!"

Alex Davis, producer, HighlyUnlikely added: “The production quickly became mathematical, especially where the scaling of shots from the real world down to micro-level was involved. This was made all the more challenging by the fact we were unable to rely on motion control for the shots in the house.  In fact all of the plates were shot using a remote-control dolly and some steady hands. There was also a minefield of restrictions on what we could and couldn’t do with the vehicles and so it was critical that we worked together with The LEGO Agency to push the creative limitations while respecting brand guidelines. We also have a lot of agency experience and I think this is invaluable to our clients during the early stages of development. It means we can be involved early on in the conversations that will ultimately shape the production. Often,we’ll find we’re able to collaboratively address challenges in the brief that might otherwise become big creative and production stumbling blocks further down the line. In this case we had an ad showing a mixture of The LEGO Group owned products, real world depictions of those products and luxury super car brands”.

HighlyUnlikely has a strong working relationship with The Lego Group and have worked on some ambitious projects together, but this was their chance to show the full extent of their capabilities. It’s easy to assume that smaller outfits like theirs might not have the skills or capacity to take on large-scale TVC projects such as this one, but in reality this is exactly their strength – they scale to fit the briefs, which makes them lean, flexible and never limited.

Mette Søgaard Lorenzen, senior production manager, The LEGO Agency commented: “It has been a great experience for the LEGO Agency to bring this ambitious creative concept to HighlyUnlikely, who together with director David Mellor and Framestore have pushed the boundaries through great collaboration, extensive expertise and extraordinary commitment to the project, resulting in a truly great spot celebrating the world of LEGO Vehicles”. Thespot will run worldwide on TV and online.