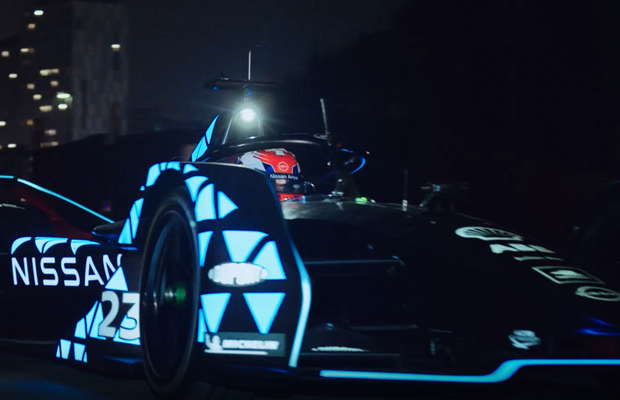 Experience creation studio HELO London has teamed up with Dark Horses to produce a ‘never been done before’ electric visual stunt with a Formula E vehicle for Nissan, that uses biometric data connected to the driver to create an electrifying visual display on the exterior of the car being driven.

As Nissan wanted to utilise their partnership with Manchester City Football Club with a live stunt that embodies the spirit of their campaign ‘Feel Electric’, HELO were asked to research and develop a custom lighting system that could connect to this biometric driving experience. It was important that it was robust enough to be driven for real at night on the streets of Manchester, and also that it would be completely non-invasive to the real Nissan Formula E vehicle in the film.

To showcase the excitement of driving a Nissan electric vehicle, Nissan wanted to create a stunt that in real time used biometric data connected to the driver of their electric vehicles. Therefore the electrical stunt showed every human thought, feeling, and sensation that in their body is powered by an electrical process occurring in our nervous system, and these sensations become heightened when driving an electric vehicle. This is what HELO were tasked to visualise in the stunt.

The Formula E racing drivers wear biometric gloves as part of their standard race kit, which tracks their biometric data including ; heart rate, blood oxygen and body temperature. Nissan felt this was an interesting opportunity to take a deeper look at what the bodies biometric responses are to the exhilaration of driving. For the Formula E driver himself, this was clearly an experience of importance.

“It was a lot of fun to be part of the Feel Electric stunt with my Formula E race car,” said Sebastien Buemi, Nissan Formula E driver. “When I race for Nissan around the world in the ABB FIA Formula E World Championship, I am of course experiencing very powerful emotions. However, away from the heat of the racing battle on the shoot I could focus more on how I was feeling as I drove on the city streets. To see my emotions and excitement light up the car was very cool.”

The team saw that there were a number of tools they could have used to achieve the brief, all with different considerations, and they entered a process of research to identify which technology would best achieve the brief. In particular, being non-invasive to the vehicle was one of the most challenging aspects, most lighting systems required heavy support equipment to power the lighting display, and the team needed something very light that required minimal on board equipment.

The solution HELO found was a custom integration of a biometric real time visualisation engine using touch designer and a newly developed electro luminescent paint built upon a custom designed wiring harness that would sit over the body of the FE vehicle, connected to a small on board battery pack and computer system.

Robin Cowie, director of technology at HELO explained the process of sharing the data so that the information could be displayed in the electricity: “We were using something called electro luminescent paint. The paint runs through a wiring harness into a micro-controller that’s sat on the nose of the car. We had various different types of animations and each one was affected in a different way through different forms of real time data streaming from the gloves.”

Tomasso says: “In the end we created something that had never been done before, visualising what it means to Feel Electric.”