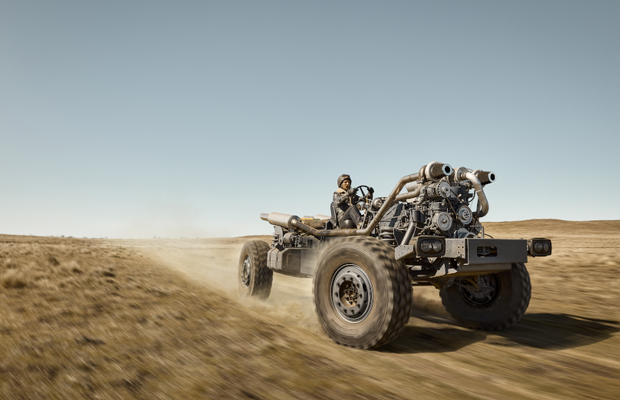 Building on its reputation as the makers of the only engine oil tough enough to withstand the harsh Australian conditions, Gulf Western Oil, Australia’s largest manufacturer of lubricants, is launching its first major brand campaign telling the story of the Lone Rider.

Created by The Monkeys, part of Accenture Interactive, ‘Lone Rider’ follows a savvy adventurer who roams the tough Australian landscape atop his trusty vehicle, with nothing but his wits and the world’s most durable engine oil by his side.

Meanwhile, his unique ride, with its huge, exposed engine and monster wheels, provides the ultimate proof of concept for the sustaining endurance of Gulf Western Oil.

To ensure the Lone Rider’s vehicle was as impressive and capable as the oil itself, Gulf Western Oil turned to vehicle concept designer Peter Pound and vehicle builder Harry Dakanalis who had previously brought the cars in the Mad Max films to life.

The 60-second film, directed by Scoundrel’s Tim Bullock, runs this week online and on Gulf Western Oil’s social channels. A behind the scenes film also takes a look under the bonnet of the epic off road vehicle, and will also feature online.

The Monkeys creative director, Benn Sutton, adds: “Motor oil marketing is traditionally horribly dull stuff where someone drones on about technological droplets. So it was an absolute joy to work with Ben and his team at Gulf Western Oil who wanted to tell an entertaining product story that captured the spirit of the Australian customer and the land they operate in.”