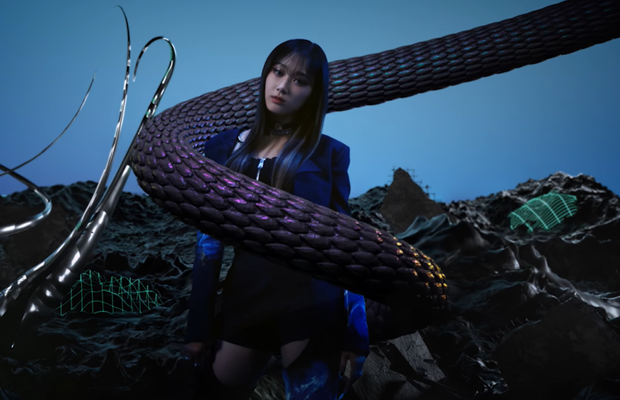 Continuing the fictional lore of the all-girl group and their calling to defeat the villain, Black Mamba, 'Savage' tells the story of how aespa met nævis, an AI character who helps the avatars of aespa appear in the real world.

Bringing K-Pop to the metaverse, SM Entertainment conceived the group to transcend the real and virtual worlds through a variety of live and digital experiences. The music video blends these worlds as aespa performs in dynamic and colorful CG environments.

Giantstep, a global leader in the development of virtual humans through its R&D division, GX Lab, created the 3D-animated aespa characters with its proprietary technology pipeline combining photogrammetry, real-time rendering, and motion capture. While the mocap data provided a foundation for animating the general movements of aespa, Giantstep’s animation team was tasked with making their movements more lifelike and in sync with the real members of the group – and equally as stylish.

Giantstep combined motion capture and facial capture for the animated dancing avatars who perform alongside the live-action aespa members: KARINA, GISELLE, WINTER, and NINGNING. Here, the team deployed a cubic voxel-like effect, referencing Glitch from Wreck-it Ralph. For nævis, who was hand-animated in the music video, Giantstep used Unreal Engine's Metahuman facial rig, which allowed the team to show a range of facial expressions similar to that of any human.

Giantstep has worked with SM Entertainment on the aespa franchise since its inception, providing VFX shots for everything from teasers to music videos to a virtual performance on 'The Kelly Clarkson Show'. They previously partnered on what was billed as the world's first paid virtual concert experience. Produced during the onset of the pandemic, the virtual concert expedited Giantstep’s development of XR Concert Technology, which combines virtual production techniques with real-time rendering and animation. These collaborations helped create the foundation for SM Entertainment to worldbuild an entire universe of aespa characters and content where Giantstep has provided everything from character development and environments to authentic motion language reflecting the fundamental traits, movements, and emotional expressions of each character.

Fans got their taste of the fantastical, multi-dimensional world of aespa when SM Entertainment premiered episode one of its web series starring aespa last Spring. The first episode has garnered more than 10 million views to date.

Giantstep built a materials library and a semi-automatic pipeline enabling existing characters to be automatically updated for every shot without having to specify a new material for each scene. The team also developed a number of texture maps, material shaders, and simulations for everything from costume designs to hair details. Giantstep’s work on the nævis character remains ongoing.

“SM Entertainment is redefining entertainment as we know it by extending their audience reach through the convergence of the real and virtual world,” concludes Heebok Lee, executive creative director at Giantstep. “It’s incredibly exciting to help make their ideas a reality while bringing our own virtual production advancements into the fold. We look forward to continuing our collaboration with SM around the aespa franchise and breaking new boundaries where entertainment and technology intersect.”