Fundraising Campaign Supports Canadians With Disabilities to Conquer the Curve

With DDB Canada Vancouver donating its creative services and resources, March of Dimes Canada launches the campaign to benefit those with physical disabilities during Covid-19 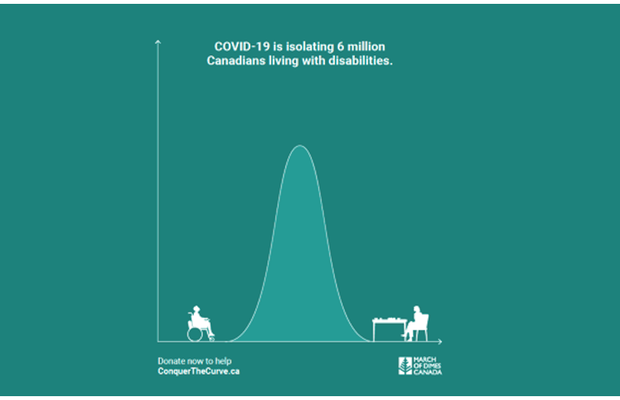 March of Dimes Canada has released an emergency fundraising campaign to combat the increasing incidences of involuntary isolation among Canadians with physical disabilities. The pandemic has created a crisis of isolation and has destabilised the programs, services and support networks they count on every day. The rehabilitation and advocacy charity is urging Canadians to take action and support this at-risk community.
March of Dimes Canada provides services and support for the over 6.2 million Canadians living with a disability, to maximise their independence, personal empowerment and community participation.
“Coronavirus has had a profound impact on Canadians living with disabilities. Feeling disconnected and vulnerable is not unfamiliar to this group, however the current climate has heightened this sentiment,” says March of Dimes Canada VP of strategy, integration and partnerships, Tim Alcock. “We can’t let the Covid-19 curve become an insurmountable barrier between 6.2 million Canadians and their ability to be independent, empowered and involved in their communities.”
Developed pro-bono by DDB Canada Vancouver, the national fundraising campaign titled, 'Conquer the Curve' includes out-of-home, broadcast, print, digital banners, and social creative, developed to drive donation support.  Funds raised will support new virtual programming, technology and other critical services needed now.
Broadcast and social creative feature an animation of people with disabilities performing everyday tasks like dining with a friend or walking to the grocery store. Suddenly the Covid-curve creates a division demonstrating how the virus has made a barrier between people with disabilities and their communities. Out-of-home print and digital banners show static animations of the same scenarios.
“The support people with disabilities receive from March of Dimes Canada is critical, and we want to do our part to create awareness,” says Patty Jones, president of DDB Canada Vancouver. “During these uncertain times, it is important that our most vulnerable populations are supported, so they feel safe and connected.”
To make the Conquer the Curve campaign possible, DDB Canada Vancouver donated its creative services and resources, and with assistance from OMD, partnered with broadcasters Corus, Bell, Rogers, CBC, and Western Media Group. March of Dimes Canada’s existing partnerships with Pattison Outdoor, Eyeshot Media, and Postmedia round out the campaign with generously donated media space.  Production partners Linetest and Wave Productions provided discounted services.
Campaign creative is presently in market across the country and will continue until 9th August 2020.