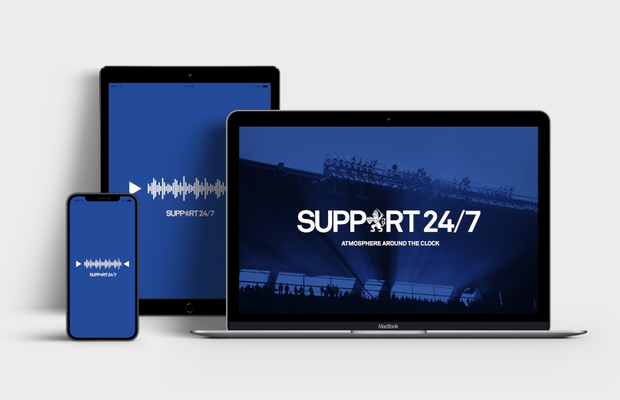 During the pandemic and the consequential lockdown, many fans of the Swedish football team IFK Gothenburg missed being able to sing along on the stands and felt the games on TV were too silent. So, IFK Gothenburg introduced Support 24/7 – an online radio channel that broadcasted crowd chants 24/7.

Sports got weird when Covid hit. Teams had to play in empty stadiums and fans had to watch silent games on TV, completely losing out on one of the best things about live sports: The atmosphere.

So, when IFK Gothenburg, one of Sweden’s biggest football clubs, wanted to find a way to connect with their fans during this strange time, the club together with creative agency Forsman & Bodenfors decided to bring the atmosphere to wherever the fans were. With Support 24/7, the first-ever radio channel that broadcasts crowd chants every hour of the day, every day of the week, year-round, was introduced.

Hundreds of recordings from real IFK Gothenburg games were gathered, turned into audio-only files and mixed into a never-ending audio stream of the team’s classic crowd songs and chants. Fans could turn on the radio while watching a boringly silent game on TV, to add some real atmosphere. Or whenever they missed the sound of a full 'Gamla Ullevi' stadium.

On game days, the live stream adapted to what happened on the pitch, with cheers getting louder if IFK Gothenburg played well and celebrations breaking out if the team scored.

“We couldn’t bring the fans to the stadium, so instead we brought the sound of the stadium to them”, said Gustav Johansson, creative at Forsman & Bodenfors.

Support 24/7 was launched when some of the toughest restrictions were still in place in Sweden. In October, fans are returning to stadiums for the first time in 18 months.