The campaign from VMLY&R Commerce connects the core benefit of the John Deere machines, leveling and flattening terrains for construction and makes it culturally relevant 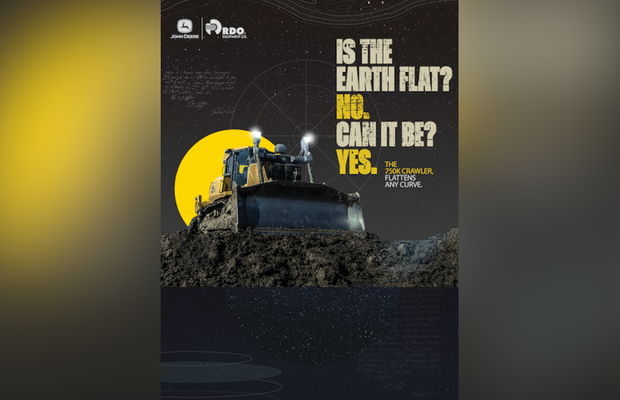 Believe or not, there are still people who think the earth is flat. A movement with thousands of followers and they even a conference. Well, RDO Equipment Co., one of John Deere’s largest construction equipment dealers, is picking up on this by actually making flat earth a reality.

“When our construction customers need the right equipment to make the earth flat, we’re the guys that can make it happen,” said Ted Horan, RDO VP of Marketing & eCommerce. “Achieving a flat earth requires not only durable equipment, but precision components that can achieve the finest grades.”

The new campaign promotes the Earth Flattening benefits of John Deere dozers, loaders and graders while giving the Flat Earthers a gentle ribbing. The stars of this new campaign are equipment themselves that are designed and manufactured in the USA and are truly the best Earth Flatteners on the planet.

In fact, these Earth Flatteners move more earth with power and efficiency. They’re big enough to handle mass-excavation and road building tasks, yet are equally adept at fine grading and site development with their power/angle/tilt blades. Plus, specific models feature Eco Mode  that reduces fuel consumption up to 20%. All of which comes in handy when you’re riding right up to the edge.

“This is definitely an attention-getting campaign that will shake up the heavy construction equipment industry in a good way.”, said Ted.

The campaign features tongue firmly planted in cheek headlines and copy, as well as a non-traditional look for John Deere print, digital and broadcast advertising. It will be brought to life with RDO Equipment customers through a merchandise campaign of apparel, hats, decals and posters all featuring the Earth Flatteners, as well supported by a full 360 campaign across digital, display, print and radio.

The RDO Equipment Co. Earth Flattener campaign produced by VMLY&R COMMERCE (formerly Geometry) is currently running in Texas and will be rolling out nationally in April 2021.

More from VMLY&R COMMERCE US