Day one of Cannes Lions kicked off with Grand Prix awards for Burger King, Essity, H&M and more in the Pharma, Health & Wellness, Outdoor, Design and Print & Publishing categories 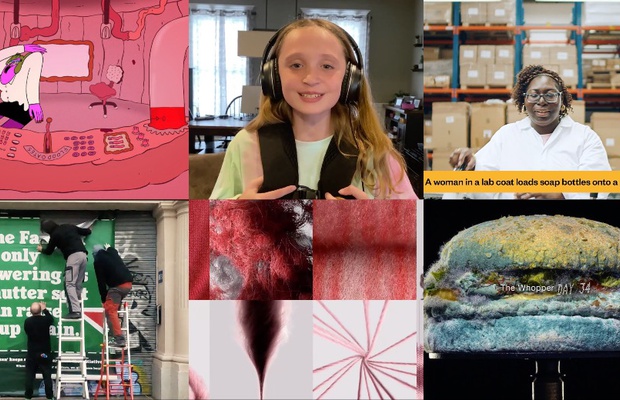 After a year hiatus, Cannes Lions is finally back this week to celebrate the best of the best in the world of creativity and advertising. To kick off day one, the awards for Pharma, Health & Wellness, Outdoor, Print & Publishing and Design Lions were announced.

There were 509 entries in the category from which three Gold, eight Silver, and 10 Bronze Lions were awarded. The Grand Prix went to Area 23, an FCB Health Network Company, New York, USA, for Woojer’s ‘SICK BEATS’; the world's first music-powered airway clearance vest for cystic fibrosis.
The campaign features the world’s first music-powered airway clearance vest for children with cystic fibrosis using the clinically proven modality of soundwave therapy in an awesome treatment experience. The prototype, a redesign of Woojer’s consumer vest, syncs with a smartphone to pull therapeutic 40Hz frequencies from music and send them to the chest.

The Health & Wellness Lions category received 1,300 entries from which the jury awarded eight Gold, 15 Silver, and 22 Bronze Lions, as well as two Grands Prix. The two picking up the top gong for the night were AMV BBDO, London for Essity’s ‘#WomenPainStories and TBWA London, for ‘Beco. #StealOurStaff’, which raised awareness of the ‘Disability Employment Gap'.

At a time where outdoor was in some ways, the only form of communication to the outside world it may come as no surprise that there were three Grand Prix winners this year in the category. There were 2,052 entries from which the jury awarded 13 Gold, 21 Silver, and 27 Bronze Lion as well as the three Grands Prix.
The Grands Prix went to: Burger King’s campaign ‘Day 35’, ‘Day 28’, ‘Day 32’ created by Burger King Miami, Stockholm, Publicis  Romania, Bucharest; Publicis Italy, Milan, for Heineken’s ‘Shutter Ads’; and Publicis Conseil, Paris, France, for ‘Renault - Village Electrique’.
Speaking after the award was announced Lisa Smith ECD at Jones Knowles Ritchie believes the brand will always be pushing the limit: "Sometimes I think about the look being too simple sometimes... it takes huge amount of bravery across all the organisation to put this out in the world. It's a huge commitment from Burger King to take risks."

From 1,012 entries the jury gave one Grand Prix as well as five Gold, nine Silver, and 15 Bronze Lions. The Grand Prix went to Ogilvy London/ Ogilvy Toronto for 'Courage is Beautiful' for Dove. The campaign was a celebration of frontline workers during the coronavirus pandemic and in a world where beauty is celebrated in all its forms, the campaigns award was apt.

From 1,262 entries the jury chose to award two Grands Prix as well as eight Gold, 13 Silver, and 22 Bronze Lions. AKQA Stockholm, Sweden picked up a Grand Prix for H&M’s ‘H&M Looop’, the world's first in-store recycling system that turns old garments into new ones. The second Grand Prix went to Superunion, London / Notpla Limited for Notpla, a revolutionary material which aims to make plastic disappear.
‘Looop’ opened to the public in an H&M store in Stockholm in October 2020, with customers able to watch the container-sized machine recycle their old textiles into something new. After about five hours, a new knitted garment is made from the piece put into the machine.