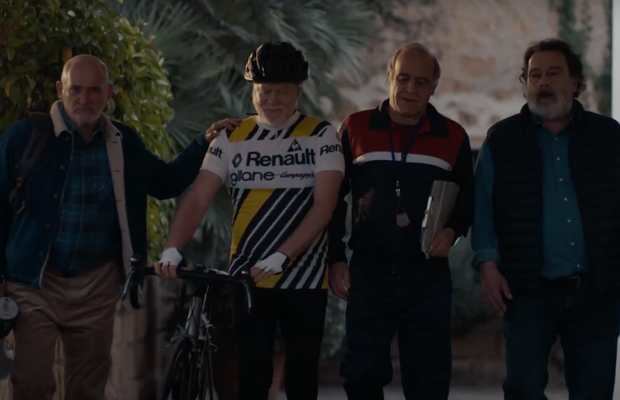 A flagship model of the SUV market, the Renault Captur has become a staple in the automotive market in just a few years. This year, the diamond brand is innovating by developing its plug-in hybrid E-Tech technology for this iconic vehicle.

Capitalising on the conventions of a feature film, Renault and Publicis Conseil have imagined a campaign as a true hymn to life and, on this occasion, reaffirms a historic link with cycling enthusiasts.

At the heart of this film, a former great sportsman wants to relive the sensations of a race in memories of his youth. While the emotions remain, the physical capacities have run out of steam. To encourage him, his daughter at the wheel of the new Hybrid Captur and his lifelong friends decide to follow him throughout this challenge. When his daughter notices her father is getting tired, she asks him to stop.

Determined to finish his race as he did back then, he refuses and is determined not to take a break. While all the lights are 'green', those close to him feign the need to refuel while the new E-tech hybrid powertrain of the new Captur guarantees savings of up to 40%.

Directed by Katia Lewkowicz and underlined by a re-orchestration of the legendary music of the film Rocky, 'Eye of The Tiger', this new Renault film shows that nothing can stop us when we are carried by the right energy.

This emotional road movie will be broadcast by all European countries on television, radio, press, billboards and digital for a debut in France on May 10th.

“The new Captur E-Tech Hybrid is a tremendous innovation that deserved an ode to life, to those dreams that last, that never end. It is a campaign of great modernity which is inspired by our values ​​and sensitively presents our link with cycling from 1978 to 1985”, explains Arnaud Belloni, Renault brand global chief marketing officer.

A comprehensive international communication kit including content for social networks, digital, billboard, press, radio, POS and CRM has been made available to European countries.