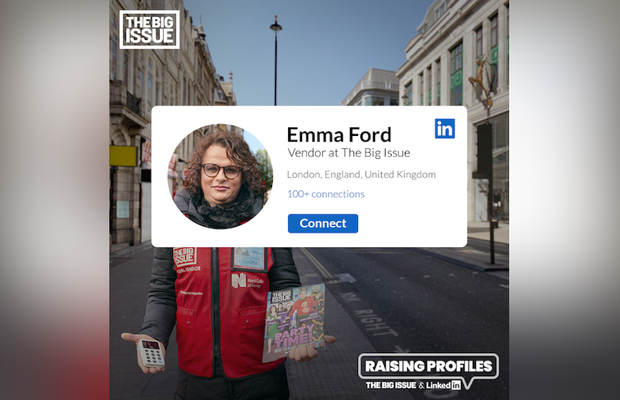 The Big Issue gives homeless or vulnerably housed people the means by which to earn a legitimate income by selling the weekly  magazine on high streets across the UK.  In March, 2020, overnight, when the first national lockdown was announced, all earning potential was stripped from the 1,700 regular vendors who made their living selling The Big Issue. This not only erased vendors' livelihoods, but it also erased their visibility and connection to the community, with 80% of vendors experiencing feelings of loneliness.

At the time, Lord John Bird, founder of The Big Issue said: "we have to accept that we don't have an income if we don't have a street". FCB Inferno's response was to find a way to recreate their sales model digitally on an unexpected yet totally logical social media platform: LinkedIn. Within three months, 'Raising Profiles' was launched as a digital inclusion project designed to improve vendors' digital confidence, build an online network and use LinkedIn as their virtual 'street corner'.

A baseline survey among vendors to ascertain their digital confidence revealed that despite seeing the internet as essential, few had regular access or confidence in using it - the initiative needed to raise vendors' digital confidence and also provide them with a means to access the internet. Vendors were given tablets donated by Dixons Carphone Warehouse, and through a combination of group and individual training sessions with LinkedIn volunteers, were helped to set up their profiles, build their online community and navigate all the platform has to offer.

Research had also revealed a critical insight: customers supported The Big Issue because of the special bond they felt with their vendors. Identifying vendors' "regulars" was key to unlocking their highest value audience and, therefore, the success of the initiative. By cross-referencing publicly available workplace addresses against vendors' pitch locations,  the team could re-create vendors' former sales pitches  digitally and reconnect them with the professionals who had walked past them every day.

'Raising Profiles' enabled vendors to rebuild and reanimate their client base after an eight-month hiatus. First, they were taught to post, comment and share content on LinkedIn relevant to their interests and passions. Then, after a warm reintroduction with their customers, vendors were primed to make a frictionless, contact-free sale via a unique e-com trigger, whereby customers could click through and buy a subscription from that specific vendor through their LinkedIn profile.

As the vendors gained more confidence, they began interacting with other LinkedIn members, engaging in conversations while also touting what was in the latest copy of the Big Issue before making a sale.  Vendors gained strong traction and engagement on the platform, amassing over 2,500 connections between them, and one vendor’s first post was viewed over 300,000 times. This drastically shifted the perceptions of the vendors, proving that they were legitimate businesspeople who had every right to be on LinkedIn.

Owen Lee, chief creative officer at FCB Inferno said: "The Grand Prix in E-commerce is an incredible achievement. Being able to help The Big Issue pivot its business model in the face of a global pandemic that has had a disproportional effect on the most vulnerable people in society is hugely rewarding. This is a perfect example of our philosophy of 'Creativity driven by data and technology'. We are so lucky to work with a client like The Big Issue that is so open to transforming its business model so quickly and is opening the doors of digital inclusion."

Paul Cheal, group CEO of The Big Issue Group, said: "This deceptively simple partnership did so much – taking Big Issue vendors into a professional space and opening the doors to digital inclusion, giving them access to a platform which reinforces that they are working for a living, and allowing them to increase their sales in the face of the ongoing challenges in the Covid-19 pandemic. The biggest result is the permanent perception shift in how people see our vendors. They're professionals with every right to be on LinkedIn."

Janine Chamberlin, UK Country Manager, LinkedIn said: “This collaboration with The Big Issue was a direct example of how much potential the LinkedIn community has to connect people to opportunity. The Covid-19 pandemic has had a huge impact for all of us, but for the Big Issue vendors, it has been nothing short of crippling. In joining our 30 million-strong community of UK members, they were able to build their online presence and re-connect to their community, as well as creating a digital sales channel for the magazine. It’s wonderful to see this brilliant creative campaign getting the recognition it deserves and our hope is that we can continue to work with FCB Inferno and The Big Issue to empower even more vendors to gain access to LinkedIn and all that it offers.

The programme is continuing and expanding with support and training from LinkedIn. Online subscriptions are continuing to grow for all vendors due to the success of the Raising Profiles initiative.

Since launch, there has been a significant subscription uplift, with LinkedIn driving 96% of total subscription traffic. In addition, total traffic for vendor subscriptions increased by 325%, and magazine sales by 400%. The partnership also dramatically boosted vendors' efficiency from a conversion rate of 1 sale per 50 offline interactions to 1 sale per 10 on LinkedIn.The campaign appeared in or on most major UK news outlets. It was supported by celebrities including Dame Kelly Holmes, Mayor of London Sadiq Khan and Gary Lineker, who shared the launch on their social media profiles.

'Raising profiles' was the latest in FCB Inferno's ongoing business transformations for The Big Issue Group.  This has included 'Change Please', now entering its sixth year, which trains vendors up as baristas to run coffee carts. In addition, the world's first resellable magazine, 'Pay it Forward ', powered by Monzo, which helped get vendors into the financial system without a fixed address, opening the doors for thousands more displaced people to access financial inclusivity.