As the long wait for the Tokyo 2020 Olympics finally nears an end, broadcasters around the world are building hype.
UK national broadcaster the BBC has an impressive track record of celebrating the Games through teaming up with the most talented visual creators for its trailers, dating back to the epic adventures of Monkey for the 2008 Beijing Games by Gorillaz co-creator Jamie Hewlett. Pete Candeland’s memorable ‘Stadium UK’ got Britain hyped for its own Games in 2012 and then Againstallodds viewed the Rio 2016 Games through the magic of the Amazon rainforest. Not to mention the phenomenal BBC Winter Olympic trailers we’ve been blessed with in between.
So, when the job of celebrating Tokyo, one of the world’s most visually iconic cities, came around, Nexus Studios’ collective of architects-turned-filmmakers, Factory Fifteen fit the brief perfectly.
Partnering with fellow Nexus Studios director Fantasista ‘Uta’ Utamaro on the art direction, the group have built an on-screen Tokyo that’s been taken over by the Olympics with street signs, shops, an arcade, gashapon parlour, a sport fanatics’ bedroom and a J-Pop music video all jam-packed with references to Olympic sports, athletes and even BBC presenters. It glistens with rich detail.
To try and understand the lengths that the team went to, LBB’s Alex Reeves caught up with Factory Fifteen.

LBB> When did this project begin for you? Was it a pre-Covid idea? Did Covid affect it at all apart from moving it back a year?

Factory Fifteen> We started working on it from January 2020 just after finishing our Ballet ‘Aisha & Abhaya’ with the Royal Opera House and Rambert. It was a pre-Covid idea, yes, when we thought the Games would actually take place in 2020. And the timeline was aggressive. There was also a lot of complexity in BBC Creative’s idea. We spent a lot of the early prep stages sifting through references and figuring out the methodology and approach. Apart from putting it on hold, Covid affected the shoot. We were supposed to go out to Tokyo and shoot the live-action in person, but of course that didn’t happen, and instead we did it over Zoom, working nearly 24-hour days because of the time zone difference.

LBB> The BBC Olympic trailers have an amazing legacy to them. What were your main thoughts when you realised you were going to be part of that tradition?

Factory Fifteen> Firstly the brief sounded like it was made for us. Second thought was, “Wow. We’ve seen these played on TV for years, and now we get to make one.” We appreciated the heritage that these films have and approached it with humility.
Creatively, we thought that they’d previously stuck to doing fully 3D stylistic animations but we were keen to keep it as realistic as possible and a live action / VFX blend route suited our hybrid style of reality and fantasy. 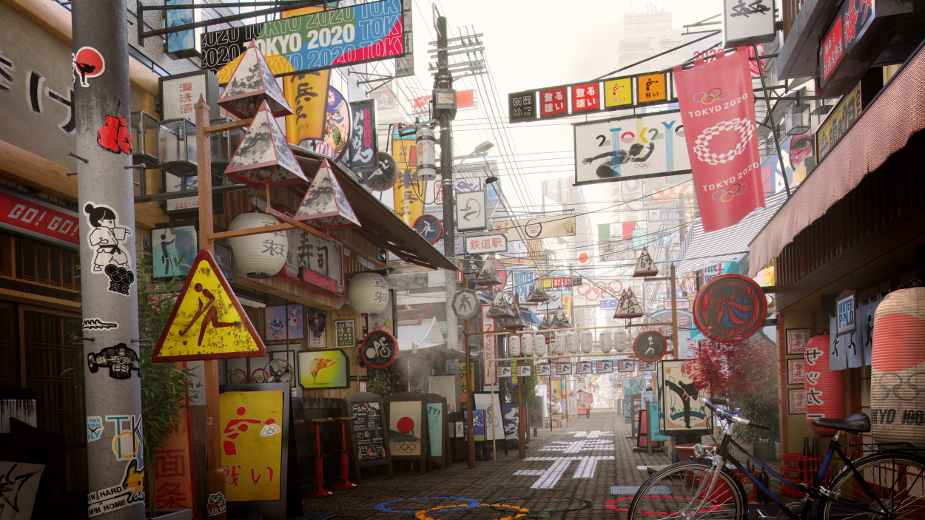 LBB> What was the brief? And what direction did you take it in as directors?

Factory Fifteen> The BBC Creative team came to us with an amazing brief - full of location possibilities, and athletes to feature. They wanted to create a dynamic but disorientating journey through Tokyo, as if it had become obsessed with the Olympics. It was the most inspiring canvas to start from. We saw and jumped at the possibility of creating something visually intense, layered and rich in environmental storytelling. We were also keen to deliver on an opportunity to bring hope and excitement to the UK after the last year. Everyone loves the Olympics.

LBB> Tokyo is a city that's often represented in the West as neon-lit and crowded. As a studio your work is very architectural, so how did you decide to approach that aspect of bringing Tokyo to the screen?

Factory Fifteen> Tokyo itself was a huge inspiration - how couldn't it be? We’ve been there several times. Each scene is driven by its location, its quirkiness, its uniqueness. Japan uses pictures more than other nations to communicate. So, it lends itself well to augmenting with other pictures and signs. That's why the augmented VFX works so well, as it blends into something you already expect and feels layered and rewarding when you do spot something that ‘shouldn’t be there’.
Our approach was one we’ve been practicing for the last 10 years - that of bringing places to life with a heightened sense of reality and fantasy. In many of our projects we use the environment as a character, helping us to tell our story in immersive ways.
We wanted to feel the presence of the camera searching and curious, excited and hopeful as it leads us hungrily into the world of the next-gen Tokyo and the new stars of the Olympics. This forward-moving camera, stitching together a series of dazzlingly detailed environments, became the driving factor of our evolved approach. 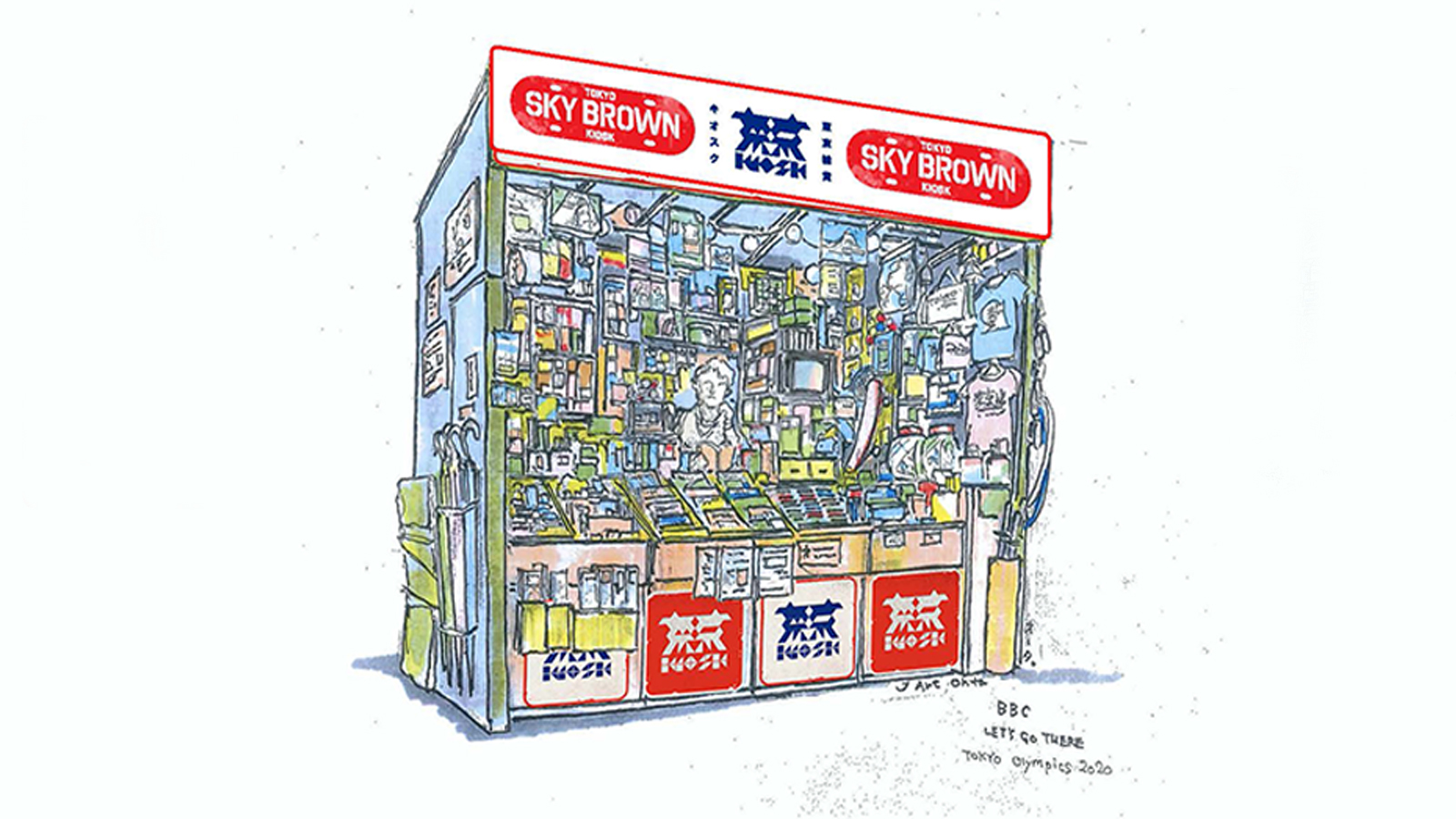 Kiosk design
Secondly, our approach was one of design detail and intensity. As trained architects turned filmmakers, we wanted the environment to tell a story, and reward repeat viewings to find all the Easter eggs of sports and athletes. Eagle eyed viewers will notice that the Olympic pictograms in the opening scene are actually from the 1964 Tokyo games, where the pictograms were actually used for the first time. As the spot develops, they transition into the 2020 pictograms which are an evolution of those 1964 versions. It’s one of many nods of old-new we peppered in, from the scene progression itself to little details like this.

Poster / magazine designs to add detail to the film's environments

LBB> How did your work on the film interact with the art of Fantasista Utamaro? What was that collaboration like?

Factory Fifteen> Capturing Japanese culture and sensibilities in an authentic way was very important to everyone involved. Our work has always been influenced by Japanese art and culture, but we were conscious of the fact that we’re still directors from the UK and really wanted guidance from a culturally authentic voice.

Some of Uta's previous work
Partnering with fellow Nexus Studios director Fantasista ‘Uta’ Utamaro on the art direction was key. Uta is part of a new generation of Japanese artists who are challenging and subverting the traditional boundaries of art and quickly felt like a perfect fit for the task.
Pre lockdown, [Factory Fifteen member] Kibwe actually spent time with Uta in his studio in New York. They got to share references and break down the brief together imparting invaluable knowledge and sensibilities. Huge shout out to him, his work was fantastic and features heavily from beginning to end.

LBB> How did you decide which parts would be live action and where you'd mix it up with animation? There are a number of overlapping styles in the final film that fit together really naturally?

Factory Fifteen> We worked out a lot of it by fully storyboarding the piece but often the decision on what was filmed versus what was created in VFX just came naturally. We did want to film as much as possible but there are limits to even the most talented of DOP’s and their crew; the inside of a gashapon machine was one of them. And flying up a wall in urban Tokyo was another, so it was clear that animation and VFX were the best creative solution. 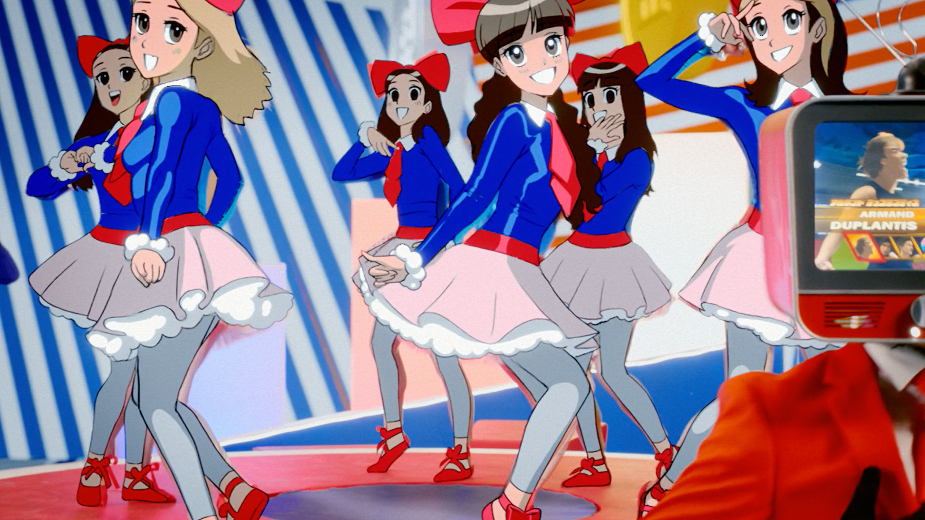 We used 2D animation in the arcade and in the J-pop scene. The J-pop scene was kind of a beast in itself. We wanted to push the idea of gymnastics-turned-J-pop dancers to its limits, so the whole scene was shot on green screen with an animated American-flag-inspired background composited into it, and as many ideas we could think of to dress the scene; from sonic-inspired ring collection on the beams, to giant bronze, silver, and gold Mario coins on podiums behind the dancers. 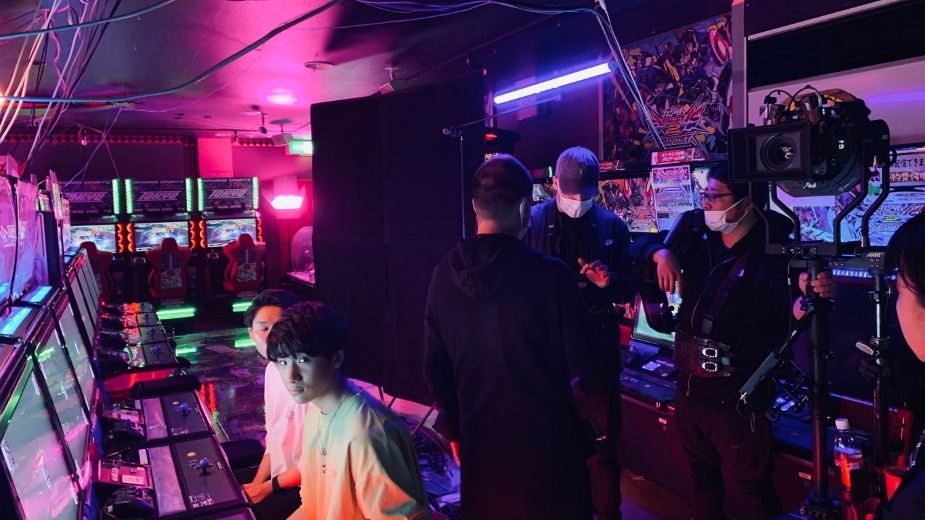 On location in the arcade

LBB> What were the biggest challenges and how did you overcome them?

Factory Fifteen> The pandemic was an obvious challenge. The project was supposed to be made by Summer 2020 and we built momentum to achieve that with the whole team. Then everything got put on hold for the better part of the year, and we thought that was that. We got the call in January 2021 that things might be kicking off again so we jumped on it and did as much prep as we could before we even got confirmation.
We were working for quite some time before we knew the Olympics were (hopefully still) confirmed to go ahead. We didn't actually get to go out there which was a challenge, as it meant directing the camera, production crews and designers remotely, but it all worked surprisingly well with a live feed to the camera and a zoom link to the crew. 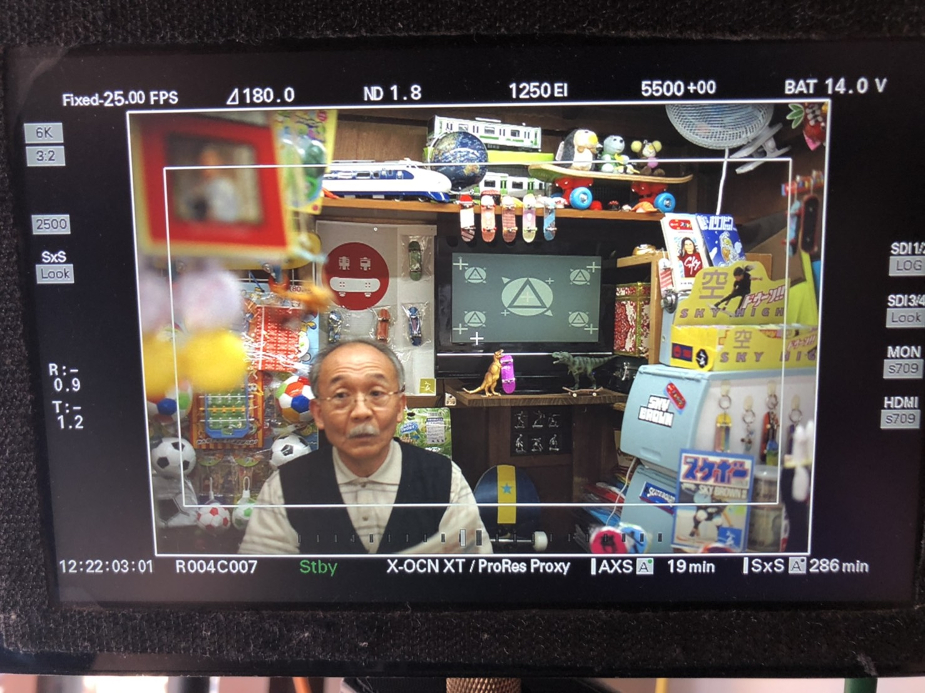 LBB> Is there a particular aspect of the film that you're most proud of?

Factory Fifteen> When you're in the process of making something you rarely stop to appreciate what you're making. You always want more, and nothing is ever finished. But now that this project is out, what we find most gratifying is that people get the idea of watching it over and over, noticing something new each time. Considering it’s going to be repeated a lot over the summer it’s great that this core concept stayed true and it’s something people look forward to seeing again and again.