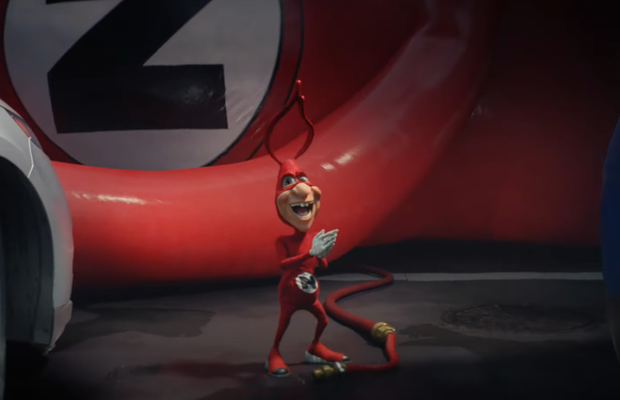 Domino’s Pizza has always had one nemesis: the Noid - an antihero that has been trying to prevent great pizza delivery since 1986. Maybe it was the chaos of 2020 that gave the Noid the confidence to return, or possibly the fact that Domino’s has continued to innovate around great pizza delivery with amazing technology. Whatever the reason, the Noid simply can’t stand it anymore, and the pesky antihero has returned in Domino’s new television ads, which begin airing today, trying to thwart the advanced technology of Nuro’s R2 robot, a completely autonomous, occupantless on-road vehicle, out on a pizza delivery.

“The Noid is Domino’s oldest and most famous villain, and the pizza delivery testing we’re doing with Nuro’s autonomous vehicle is exactly the kind of technology innovation that could provoke the Noid to return,” said Kate Trumbull, Domino’s vice president of advertising. “However, after 35 years of practice in avoiding the Noid, we’re pretty confident we know how to defeat it.”

While television screens are a great place for a classic nemesis to return, mobile devices are the newest place for the Noid to cause problems. Starting May 7th, the Noid will join the newest installment of the Crash Bandicoot gaming series, Crash Bandicoot: On the Run!, a new mobile adventure that honours the rich 25-year history of the beloved franchise. For a limited time, the Noid will be featured as one of the game’s mini bosses, pitting players against the Noid as Crash progresses through the story. Avoiding the Noid has never been so fun! Players will also have access to exclusive Domino’s pizza-themed player skins, showing players love for all things pizza.

“We’re excited to launch our first in-game collaboration for Crash Bandicoot: On the Run! with Domino’s,” said Richard Hocking, head of marketing at King, the game’s developer. “With the Noid making its big return this year and the Crash Bandicoot franchise celebrating its 25th anniversary, it was the perfect opportunity to have players take on the Domino’s antihero alongside other nostalgic Crash bosses in this brand-new mobile adventure.”

WorkInProgress (WIP), Domino’s creative agency as of January, 2021, and Domino’s partnered with King (a leading interactive entertainment company for the mobile world) to develop the Crash Bandicoot: On the Run! mobile game integration.

The TV portion of the Noid campaign was conceptualized and developed by creatives at CPB, who have since joined WorkInProgress, including creative directors Kelly McCormick and D’Arcy O’Neill, associate creative directors Jake Roberts and Dylan Cimo, and executive producer Rachel Noonan.

The spots were produced by Arts & Sciences, led by director Matt Lenski, and the CGI work was created in partnership with post-production house, Artjail, who spent many months helping the team actualize their vision and bring the Noid to life.

WIP also produced additional Noid content for social and digital channels, including a throwback video shoot featuring the Noid and Crash Bandicoot in their classic mascot suits from the '90s.

Feeling sentimental about the Noid? Domino’s now has a limited number of Noid T-shirts and tumblers available for purchase on Amazon. All profits from the Noid merchandise will go to Domino’s Partners Foundation, an independent internal nonprofit organization that provides financial assistance to Domino’s franchise and corporate team members in need. The Noid has even schemed its way into GIPHY, the online platform that houses GIFs and stickers for use on all major social media platforms. Fans can find and share the devious creature by searching “The Noid” in GIF and sticker search engines on Facebook, Twitter, Instagram, Snapchat, and TikTok, or by clicking here.