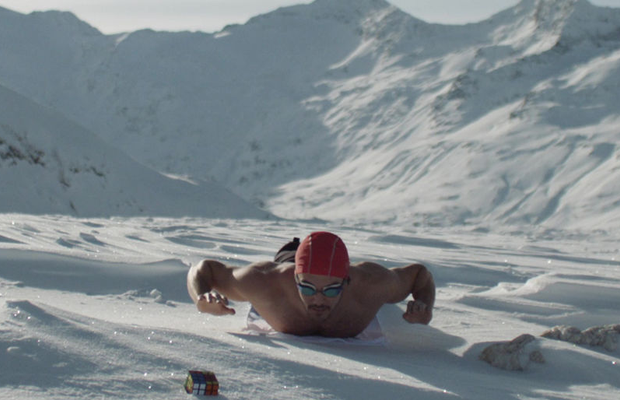 Rok Luneznik, DIVISION line producer, comments: “Our biggest challenge was the accessibility of the location high in the Austrian Alps. It’s not possible to plan mountain weather more than a couple of days in advance and whilst we’d been concerned about shooting in November, before the official season starts, we actually had three metres of fresh snow fall within 48hrs just a few days before the shoot, which caused different issues. The weather was problematic, with strong winds and difficult snow conditions with risks of avalanche, making it impossible to film on some days. This meant extra weather days extending the shoot, though once the conditions cleared, the location and snow were spectacular."

Another technical challenge for DIVISION was the Slovenian studio construction of a ten metre snow channel, with the additional design and build of a machine to pull the swimmer through a pool of artificial snow – another first for the production services specialist.

Sam Pilling, director Pulse Films, comments: “Massive props go to our Slovenian crew for making absolute magic happen – and always with a smile in the most adverse weather conditions I’ve ever experienced – and the whole team at DIVISION, Rok, Rok, Malek and Vlaho for one of the most technically and logistically challenging commercial shoots."

Watch the behind the scenes ‘making of’ from The Mill here.