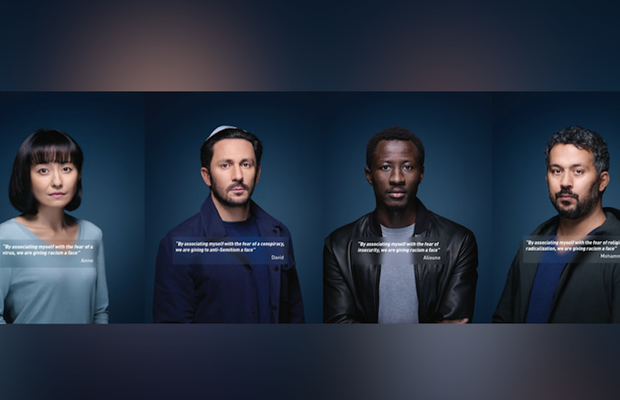 LICRA and Publicis Conseil have created a campaign to reaffirm the commitment and vocation of the association, since its creation, in the fight against all types of racism and thus to assert the 'R' of the International League Against Racism and Anti-Semitism - or in French, Ligue Internationale Contre le Racisme et l’Antisémitisme (LICRA).
This campaign illustrates how racism has evolved. Because if less and less French people declare themselves as racists, acts unfortunately increase. A new form of racism qualified as 'ordinary' and a generated hatred which today crystallises around the fear of the other. Because it is fear that often leads to racism. And in our society where continuous information and overexposure to messages have become a norm, this fear is frequently spread. Often irrational, manipulative and intrusive, it takes on the face of current affairs, debates and theories to interfere in our subconscious and still too frequently lead us to racism.
In this campaign, Publicis Conseil and LICRA wanted to give a voice to this fear, to personify it in order to dismantle the extent of its power. Starting from individual prejudices, it tends to show how these fears manipulate our daily behaviour.
The film is based on the technology of deepfake and morphing, the faces follow one another and thus illustrate the discourse around the fears conveyed.
By materialising the fear which trivialises racism, the LICRA hopes for a collective awareness: our enemy is fear, not the difference.