Coffee is Contraband in This Cop Dramedy Parody for 1850 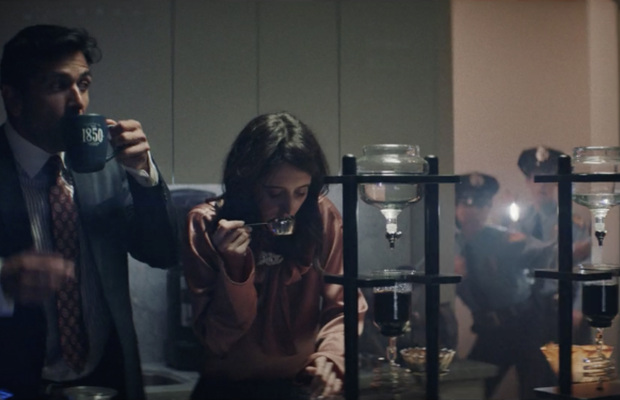 The J.M. Smucker Company is at it again, redefining modern creative excellence in the CPG category as it launches its new cinematic ad campaign for 1850 Coffee, featuring creative as bold as the ‘contraband caffeine’ itself. The centrepiece of the campaign from Publicis' PSOne is a cop dramedy, a two-minute short film which smartly blends creative storytelling and craft, with some pure, never cut, brand equity. 1850 Coffee is a brand with quality so high, so pure, it’s questionable if coffee this good is even legal.

Since its launch in 2018, 1850 Coffee’s loyal fans have been praising its bold and balanced flavour, saying it’s so delicious 'you don’t even need to add milk'. Creatively, that translated into a wonderfully outrageous story arc: the best brew on the Black Market, coffee quality so high, so pure, it’s questionable if a coffee this good is even legal.

In the showcase two-minute film, and the 60-second broadcast spot, Quality That’s Criminal, 1850 Coffee is humorously treated as illegal contraband. We witness men in ascots hiding steamy hot mugs in their blazer pockets, stockbrokers pouring it from carafes on street corners and Hollywood 'it' stars getting cuffed for possession. The creative is an overtly absurd cop dramedy that’ll make you want to get your hands on your own steamy hot mug of 1850 Coffee.

The Quality That’s Criminal campaign includes broadcast, online video and social activation. The campaign is from Publicis Groupe’s Power of One solution, PSOne, a bespoke agency for The J.M. Smucker Company.

“Publicis injected breakthrough creative on 1850 Coffee in a way that is completely unexpected from a coffee brand,” stated Liz Mayer, consumer engagement & omnichannel customer marketing lead, The J.M. Smucker Company. “Storytelling, art and craft are all taken to an entirely new level, resulting in the perfect blend of humour and style. I really believe this distinctive body of work will drive incredible awareness and attention.”

“Coffee has been in and around the advertising industry and Wall Street for many decades. The biggest deals and creative ideas are fuelled by it,” stated Andy Bird, chief creative officer, PSOne. “So our debut national TV campaign for 1850 Coffee makes sense in every way. This work was just waiting to be made, and I couldn’t be prouder of our team and our brilliant client partner who made it happen.”

“This work is the result of the most incredible client/agency relationship I’ve ever been a part of,” commented Erica Roberts, executive creative officer, PSOne. “Five months ago, we had a completely different campaign for 1850. It was solid and smart, but it was safe. And there was no way that it’d breakthrough in the way we needed. So while on set during a different J.M. Smucker Company  production, our teams sat down and decided to blow up the current work and start over. It meant walking away from months of creative development and consumer testing, and that we’d only have three weeks to land on a new campaign. It paid off.”