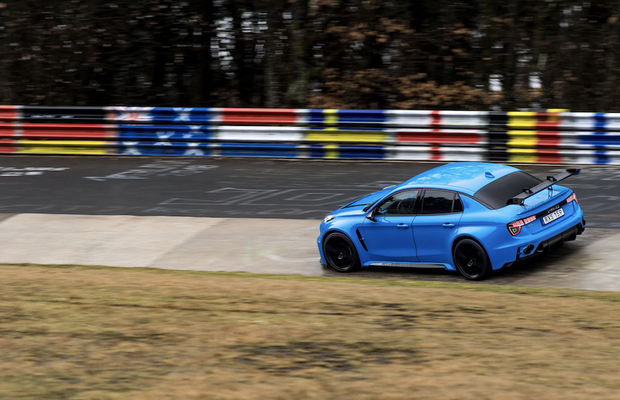 Developed by largely the same team that developed the previous concept cars of Cyan Racing, the 450-hp Volvo C30 Concept and the 508-hp Volvo S60 Concept.

"We continue to push past the boundaries and goals that we have set for the Lynk & Co 03 Cyan Concept, a car that acts as a development platform for future Lynk & Co performance cars and parts," said Henrik Fries, head of automotive R&D at Cyan Racing.

"While our main purpose for the many laps on the Nürburgring Nordschleife is development, the records that we broke are a true testament to the potential and capabilities of the Lynk & Co platform, as well as our engineering philosophy from more than two decades of motorsport and road car performance".

Development of the Lynk & Co 03 Cyan Concept will continue throughout the last part of the year, with the team turning attention to winter testing in the north of Sweden as part of creating a performance car for all roads, all seasons and all conditions.

The 7:20.143 lap record was set using the full 20,832km circuit layout as per the official Nürburgring standard and not the shorter 20,600km version as often used by other manufacturers. The Lynk & Co 03 Cyan Concept lapped the shorter version of the circuit in 7:15.123.

Cyan Racing also holds the lap record for the fastest ever front-wheel driven race car with the 2017 World Title-winning Volvo S60 Cyan TC1 - lapping the Nordschleife + GP circuit in 8:34.813, as well as previously holding the lap record for four-door road cars with the Volvo S60 Concept in 2016 with the time 7:51.110 on the 20,832km circuit.