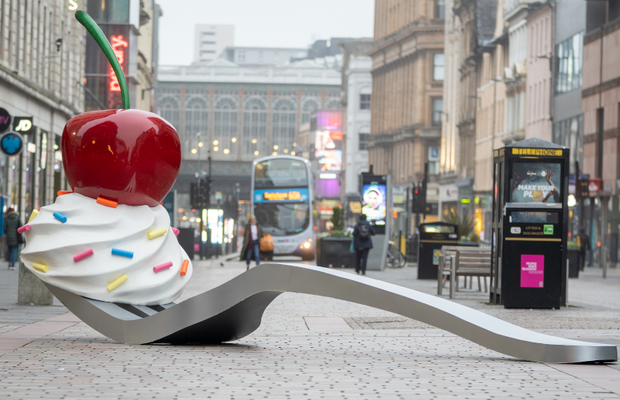 Channel 4 is whipping up excitement for tonight’s hotly anticipated return of The Great British Bake Off with the installation of a show stopping feast for the eyes in Glasgow’s city centre.

The 78ft tall layer cake transforms an Argyle Street building into a beautiful bake - complete with a giant 23ft fork. It represents just one way the broadcaster is turning everyday ordinary scenarios from across the UK into sumptuous creations to mark the return of Britain’s biggest baking show.

Innovative outdoor digital screens in cities including Leeds, London, Glasgow and Manchester depict the locations’ skylines and reflect the changing weather conditions in real time with a delightful Bake Off twist. 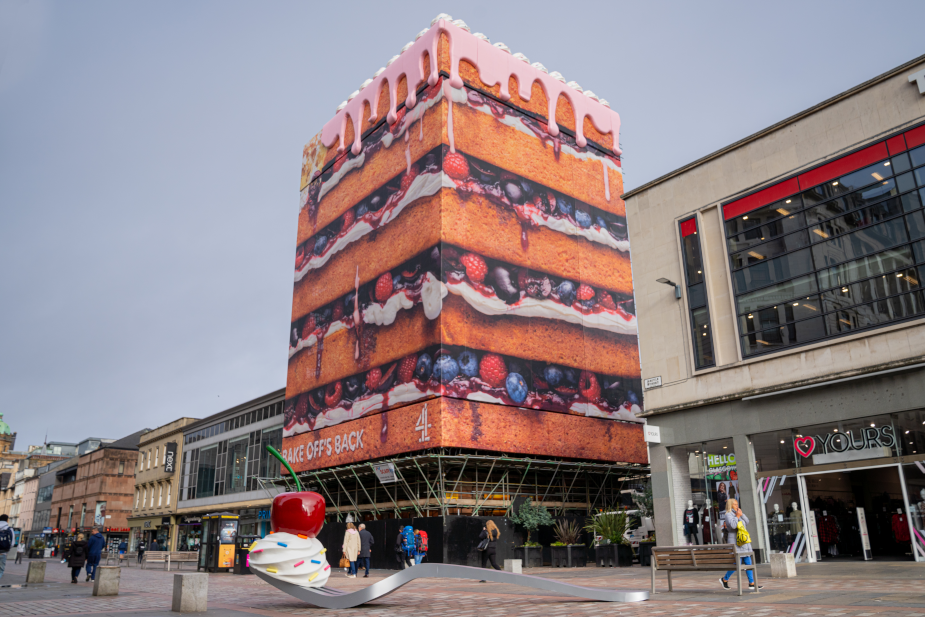 A series of short films on TV and social media merge glorious cakes and bakes from within the Bake Off tent with the real world - from coastal cliffs exposing the UK’s Victoria sponge centre and a Battenburg lorry on a busy motorway to tractors lifting Lamingtons and the construction of a mille-feuille tower block.

All of the activity mirrors the joy and escapism that The Great British Bake Off brings to viewers’ everyday lives by making things a little bit sweeter and little less serious. Channel 4 has also created a bespoke AR lens that enables users on Snapchat and Instagram to have fun turning themselves into an array of bakes.

Amber Kirby, marketing director, Channel 4 said: “People love indulging in the Bake Off escapism every year, it’s just so gloriously fun. This campaign imagines how cake can make life just that little bit sweeter; transforming the mundane, the everyday, and the sometimes serious, into something that just makes you smile. Just like the smile you have knowing that Bake Off – Channel 4’s biggest show - is back.”

Lynsey Atkin, executive creative director, 4Creative said: “In years past Bake Off has served up some big fantasy ads – from singing cakes to Cookie Monsters and oven-ready miners. This year rather than escaping our world completely, we wanted to merely improve it after a tough 12 months – with layers of buttercream and a collision of fun elements in typical D-I-Y Bake-Off style.”

Last year Bake Off achieved its biggest ever run on Channel 4 averaging a consolidated audience of 10.6 million viewers per episode and a 40% share of the viewing audience. It also pulled in its biggest ever share of 16-34 year-old viewers with a massive 63.5% making it the second biggest TV show for young viewers in 2020.

Series 12 of The Great British Bake Off launches at 8pm tonight on Channel 4. This year’s bakers were revealed last week.

The new campaign was commissioned by Channel 4 Marketing and produced by the broadcaster’s award-winning in-house creative agency 4Creative working with OMD UK and Talon Outdoor.