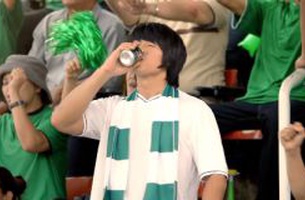 BBH China has rolled out a new integrated campaign for Carabao, a global energy drink brand, following its appointment earlier this year.

Launched in Thailand in 2002 by Carabao Tawandang Co Ltd, Carabao is a leader in the global energy drink category and has been previously launched in the UK – one of the top five energy drink markets worldwide. The brand is now focusing its efforts in the growing China market which it entered in 2017.

In a departure from traditional campaigns in the category dominated by extreme sports and adventure, the campaign uses real life situations and relatable characters to engage consumers and to highlight the benefits of consuming the energy drink.

The campaign lands on the line ‘Green Energy. More than you can imagine”— inspired from the natural energy of guarana and the limitless energy that could be unlocked with Carabao. Guarana is a key and differentiating ingredient of the drink, which also contains vitamin B6 and B12. Targeted at men between the ages 18 to 35 years, the campaign comprises of TVC, online, print, POSM and social component.

The campaign simply brings the product benefit to life by humorously showing ordinary people accomplishing extraordinary things to a quite unimaginable extent. Comprising of five different executions in both 15s / 30s versions, the films revolve around characters like a student, an office employee and a sports fan, who get a boost in energy after drinking Carabao in everyday situations.

Commenting on the campaign, Carabao China spokesperson said, “We strongly believe there is an opportunity to broaden the appeal of energy drinks in the Chinese market. Carabao with its “green energy” has all the right ingredients to offer to savvy Chinese consumers who lead stressful and busy lives and are looking for a great tasting energy boost. We are confident that the current campaign with its light-hearted approach will create awareness and increase trials for the brand.”

Arthur Tsang (Chief Creative Office, BBH China), “We are delighted to be on this journey with Carabao as they expand into the China. As a newcomer to the market we need a campaign that is telegraphic and cuts through the very cluttered drinks category – to punch above our weight. Our execution focuses on humour and a refreshingly different look at energy drinks and performance.”

Launched in the second week of July across online and traditional TV platforms the campaign will be live until end of 2018.