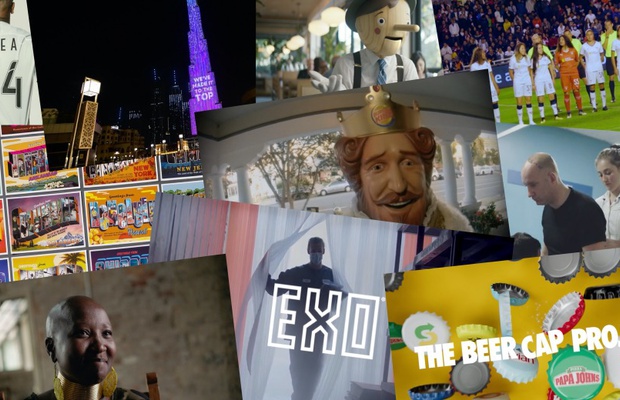 MullenLowe Group has taken on some colossal social causes over the past couple of years – tackling binge drinking, representation in advertising, and supporting the NHS – but it’s managed to have fun too. Looking at their Cannes entries, there’s plenty of playfulness. Unable to come together and congratulate each other in person at Cannes, we’ve invited creative leaders from the network to pick out their favourite work by their colleagues in other offices.

NHS England: We Are The NHS

MullenLowe Group UK
Paul Banham, Regional Executive creative Director, MullenLowe MENA: “The National Health Service (NHS) formed in 1948. Initially, it advocated free medical care for all citizens of Britain regardless of wealth or class, and from the cradle to the grave. Today it is widely regarded as one of the best (if not the best) health services globally. On the other hand, this ad was written and produced 72 years later amid a global pandemic and the most significant challenge the NHS has faced since the Second World War. Now, to be the best, you need the best talent, right? Well, that's what this ad and recruitment campaign set out to find, inspire and hire. How? With a good old manifesto style ad. The trouble with this approach is that there are more manifesto style ads are out there than flu patients - come the winter months in the UK. But thankfully, this ad isn't typical in any way, shape or form. It's rarer than Fields Disease, in my opinion – which affects one in a million patients (or thereabouts). Why? Because its writing is genuinely world-class – in fact, I’d go so far as to say it’s utterly sublime and beautifully poised. It builds and builds until it's the only thing you can hear (or watch). Plus, the seamless intertwining of new and old NHS footage for yesteryear never jumps a cut or misses a beat. The overall storytelling, crafting, writing, editing and sound design… left me with a severe case of goosebumps, and that's the test result you hope for. That's what sets it far apart from a million other forgettable vignette-based manifesto ads.
“The best way I can explain this ad (other than telling you to watch it) is that it was made by the best in the ad biz, for the best in the medical profession. The love, care, and attention that went into delivering it mirrors the care that the best health service in the world provides to their patients every day. And that's a rare thing.
“I'll leave the CD behind the work sums it up; ‘After everything the NHS has been through these last months, we felt the pressure to take the work to another level, and with this brief, we had the opportunity to tell a greater story. We wanted this film to show just how special the NHS is - to raise the hairs on the backs of people's necks and inspire thousands to consider a career with this special institution. You could say this film has been 72 years in the making.’”

MullenLowe Brasil
Fabio Brigido, Creative Director / Head of Art, MullenLowe U.S.: “This campaign brings to surface one of the oldest and most repulsive symbols of homophobia in Brazil, the number 24, and turns it on its head. Very simple. Instead of hiding it or avoiding it, people now are taking pride on wearing it. It’s amazing to see people talking about this and great athletes joining the cause. The fight against homophobia is a tough one and strong cultural ideas like this one will always be a powerful instrument to help.”

MullenLowe SSP3
Tomás Ostiglia, Executive Creative Director, LOLA MullenLowe: “The Beer Cap Project is a brand taking regulations seriously and taking the phrase “drink responsibly” to the extreme. I love it for many reasons. Turning the caps into a media space, helping consumers in a very specific way and also generating one of the most outstanding collaborations between brands in recent times.”

Martin Agency
Jose Miguel Sokoloff, Global President, MullenLowe Group Creative Council: “GEICO is one of those brands that is associated with consistently great advertising. You may not like some ads individually, but everyone has a favourite GEICO ad that makes them smile. ‘Sequels’ encompasses this thinking. The idea of bringing back old commercials is bold, and the quality of thinking to make the ‘Sequels’ into incredibly successful, fun ads all over again is a show of creative power.
“BUT, most of all, only a brand and agency that have been consistently creative over the years can pull this off. They have encouraged huge volumes of audience participation and come out with more ads while still being provocative, different and interesting. The GEICO YouTube channel even has more subscribers than the Bloomberg YouTube channel.
“Every creative in the industry would love to be able to try their luck at a GEICO ad. Most of them would never make it because the bar is so high. I believe it is time we recognise this and give GEICO’s consistency over the years it’s deserved recognition.”

Unilever’s Lifebuoy: H is for Handwashing

MullenLowe Lintas Group
Berkay Ozay, Executive Creative Director, MullenLowe Istanbul: “We all love doing purpose work, but let’s be honest, only a few of us can make real change. I admire and envy this type of work because you can see that these ideas will surely create big positive changes in the long term. Implanting your message into young minds when they are at the top of their learning abilities is an amazing approach. Hope to see more projects like this, and I hope to do more projects like this.”

MullenLowe Delta
Diego Muñoz & Juan David Pardo, Executive Creative Directors, MullenLowe SSP3: “This is an idea that helps us to understand the gender inequality in sport from a different perspective, and the way they use technology to demonstrate the problem is very clever. We should do more of this kind of work in Latin America to make a stand and solve this problem by bringing it into the light.”

MullenLowe Boston
Laurel Boyd, Chief Creative Media Officer, Mediahub: “I love the ingenuity of this campaign in finding a media canvas in an unexpected place. So many brands flock to technology just to take advantage of a shiny object, but in this case, it aligns perfectly with the playful irreverence of the BK brand and drove real business results with zero investment.”

MullenLowe MENA
Amer Jaleel, Group CCO & Chairman, MullenLowe Lintas Group: “It’s brilliant on so many levels I don’t know where to start! First the fact that it’s so contextual to the issue, a real issue experienced locally. Two, such a simple, imaginative and rewarding tech solution! And three it’s so consistent with the brand Dubai. It’s so Dubai! I mean the place known for excess now does excess with a heart! Amazing!”

LOLA MullenLowe
Dave Weist and Tim Vaccarino, Executive Creative Directors, MullenLowe U.S.: “Like many brilliant ideas, this one seems inevitable and surprising at the same time. It’s truly a manifestation of the Real Beauty ethos and it puts the brand squarely behind its beliefs. The execution is also very honestly done and allows you to see how the real power marketing can improve the world.”

MullenLowe Boston
Katrina Encanto, Global Creative Director, MullenLowe London: “The last year has been one of reflection about our own values, begging the question: What is it we’d like to be known for? This is true on both a personal and a national level, with the last year only putting a spotlight on how countries have reacted to challenges. For some countries, problems have only gotten worse with the pandemic, such as mass shootings in the U.S. and the lack of gun laws. Through beautifully designed postcards, this campaign gave people a means to express what it is they’d really like America to be remembered for.”

Mediahub
Danny Robinson, Chief Creative Officer, Martin: “It is often that ideas created to promote a series use insights connected to the show’s characters or viewers. Snowpiercing Culture stands out because it not only created a direct link to the show and its primary storyline but is wrapped in a socially relevant topic which allows it to be more complex than a promotional stunt meant to garner viewers. It was also a smart tactical decision to launch the idea at ComicCon, the very place where the show’s evangelists would be, increasing the chance for cultural conversations on social which is how ideas that are experienced by few get seen by many.”

Meet the Winners of the 2021 MullenLowe NOVA Awards

Isak Åkerlund: “The Abilities You Possess as an Artist and Designer are Very Powerful Tools. Use Them Wisely”

Meet the Shortlist for the 2021 MullenLowe NOVA Awards