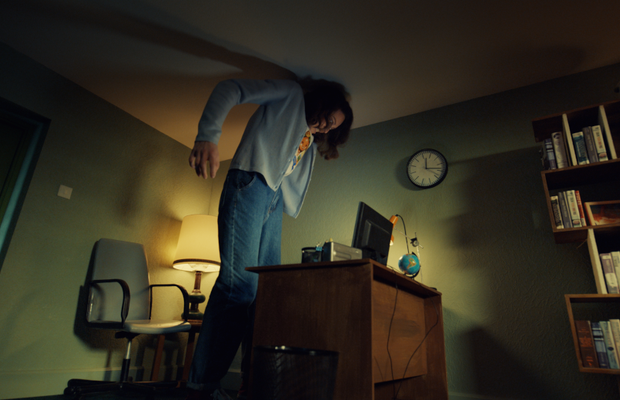 The Broadband Rage campaign will be supported through the line, including YouTube, Radio, Podcasts, Digital Audio, Print, Display, Social, OOH and PPC. Outside of Broadband Rage, BT’s hybrid broadband campaign will be extended with a partnership with DCM, welcoming consumers back to the cinema with a bespoke execution.

The advert opens with a woman sat at her desk, the dreaded ‘wheel of death’ onscreen as the video she is watching buffers. Her wi-fi is down. Viewers see her push back from her desk and watch as her shadow grows into an ominous, large figure. She has been struck by broadband rage, her face snarling as we hear her say 'You!' as she points at the offending router. She stomps on the device crushing it beneath her feet. But it doesn’t stop there, in her supersized hands she grabs the computer monitor, stretching its screen, before hurling it across the room, smashing into her fish tank.

The track ‘Where's Your Head At’ (Basement Jaxx cover) by Melkbelly kicks up the frenetic feeling of the campaign, as we’re transported to another setting, a tablet lays on the ground, its screen buffering. This time a fridge is the casualty, with its contents flying around the room as a result of its owners’ fury. Now to another victim of broadband rage, we see her slice and dice the offending wi-fi router with rulers as sharp as samurai swords.

The montage of destruction continues, as we see a retro router floats across a room. A moment of apparent calm, all before exploding into a thousand pieces of debris, before we see a woman wielding a bat and destroying the offending item.

Spanning out, we see a couple, on set, enjoying a night in to stream their favourite TV show. We hear the voice over say: “Why suffer broadband rage? Only BT’s hybrid broadband is backed-up by EE’s mobile network. New unbreakable wi-fi. One day all broadband will be like this.”

Pete Jeavons, marketing communications director at BT & EE says: “Our latest innovation demonstrates a step-change in broadband, an unbreakable connection for the moments that matter. In a time when connectivity is more important than ever, buffering, drop-outs, and pixilation, just isn’t good enough – in fact, it’s plain infuriating. Backed up by EE’s award-winning mobile network, BT’s hybrid wi-fi is a bold step towards ending broadband rage, so an equally bold creative to communicate the superiority of our product was paramount.”

In partnership with Saatchi & Saatchi, over the last year BT has combined brand leadership activity with a creatively bold approach to communicating the superiority of its innovation, connection, and service.

Only BT’s hybrid broadband is backed up by EE, the UK’s no.1 mobile network, for an unbreakable home wi-fi connection. For more information visit here.