Behind the Work: Show Yanagisawa on Keeping It Real to Work up a Pocari Sweat 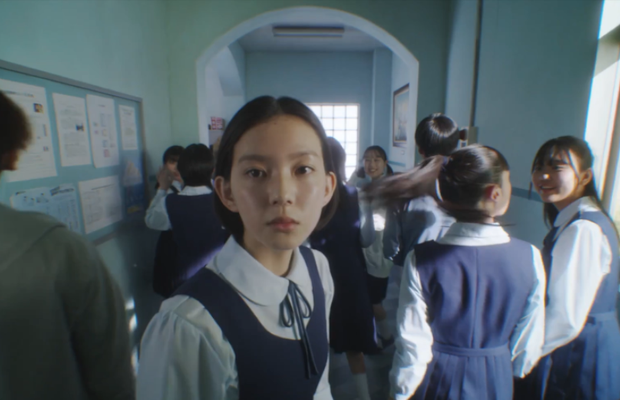 Visionary director Show Yanagisawa is never one to shy away from a challenge. So, when he came on board to direct an ad for Japanese drink brand Pocari Sweat, it was bound to be a spectacle. The film follows actress Nakajima Sena down a 85 metre long set as she turns from the crowd in a statement of defiance. Show believes that image is a representation of the world at the moment.
When he was approached for the project, he was asked to portray a heroine who believes she is enough, even if the people around her disagree and Nakajima is just that. Throw in some blossom, a crowd of schoolchildren and the dulcet tones of Aina the End and Roth Bart Baron and Show has created something spectacular.
He speaks to LBB’s Natasha Patel about the project, why he was swayed away from using CG and working on a brand that was big in his childhood.

LBB> You've worked on a lot of great campaigns, but what was it like to work on Pocari Sweat?

Show> Pocari Sweat has a special place in Japanese advertising. The product has a long history of being loved by Japanese people, and I used to drink it every day after club activities when I was a student. There are many masterpieces in the Pocari advertisements. I was honestly happy to be involved in such a big project.

LBB> What was the main message of the film and how did you make sure it was conveyed?

LBB> The set for the film is incredible, tell us more about how you created it.

Show> I built an 85-meter-long set with wavy floors, walls and ceilings. It was very difficult to make the wave-like structure, but at the same time, it was important to make it strong enough for the cameramen, crew, extras, etc. to run on it.
We had about 50 people running on the set at once. The cameraman and the heroine could not run while looking down, so if they fell, it could be a serious accident. For this reason, it was very difficult to design the safety of the set itself.

LBB> This film feels so much more ‘real’ than something created in CG, was this always your intention?

Show> I had an idea for the last scene where the main character runs and climbs a cherry tree and makes a big jump towards the blue sky. Like the Levi's ‘Freedom’ ad directed by Jonathan Glazer.
When I submitted the storyboard, I was told by legendary Japanese creative director Ogi Atsushi, "The target audience for Pocari Sweat is high school students. I want you to think again about whether they would be happy with something well-made using CG in this day and age. I think it is more important to make people think that there are people who really try to do something stupid, even if it fails. Especially in today's Japan, I think that kind of advertisement is necessary.” Taking Mr. Ogi's advice, I shifted to the current storyboard that minimises CG.
It was important for the branding of the Pocari Sweat product that people actually run, sweat, and drink Pocari in reality.

LBB> What was the biggest challenge you faced while working on this film?

Show> Which genre of music would be cool to match the aggressive and chaotic images? Like the Burberry ad directed by MEGAFORCE, I wanted to dare to match the violent images with a soft and somewhat melancholy voice - and with unplugged sound quality! I consulted with a music producer Kazuyoshi Tonami and was very fortunate to find two musicians, Aina the End and Roth Bart Baron, who were both famous in Japan. I was worried about whether they would accept the job, but they agreed to the project "Against".

LBB> What message do you hope the film will send to viewers?

Show> We did everything we could as a team, so I hope people will feel what they want to feel. But I hope that people will think that there are people who are really trying to do such stupid things for creativity.

LBB> Lastly, what is your favourite scene?

Show> It's the smile on the heroine's face when she grabs her friend's hand and starts running. It's a really wonderful expression, thanks to Nakajima Sena.

Behind the Work: James Frost on a Music Video Created Entirely in Unreal Engine