Behind the Work: Cadbury’s Caramilk Superfan Sits on Billboards Across the UK 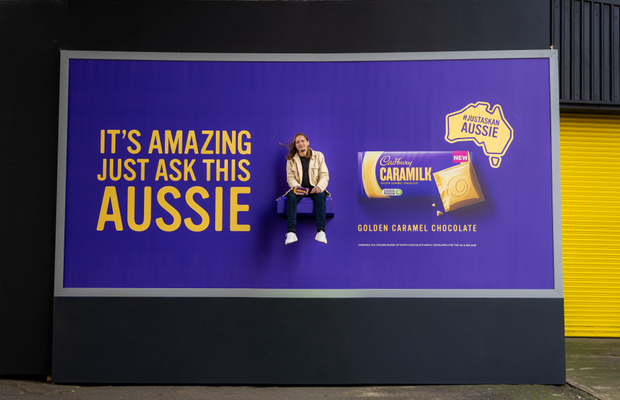 Hoarding, selling at a premium and rationing Caramilk bars was part of the Australian obsession that Cadbury couldn’t deny. In their latest campaign, Cadbury brings the coveted Aussie treat to the UK, in an effort to meet the demand of Aussie chocolate fans and show the UK population what they’ve been missing.

The out-of-the-box campaign means Caramilk wasn’t advertised in a conventional way. As billboards were resurrected in London, Birmingham and Manchester, the locals were surprised to see an actual person sat right in the middle of the billboard, as ‘Just Ask An Aussie’ was taken quite literally.

The interactive nature of the campaign and the shock of an actual person sat on the billboard, resulted in many surprised, intrigued reactions which made waves across social media and created quite a debate around the chocolate bar. What’s certain, however, is that the campaign certainly made an impact on Aussies and Brits alike.

Jonny Parker, executive creative director at VCCP London spoke to LBB’s Nisna Mahtani about the logistics of getting a person on a billboard and the UK Caramik fans who are “giving the Aussies a run for their money.” 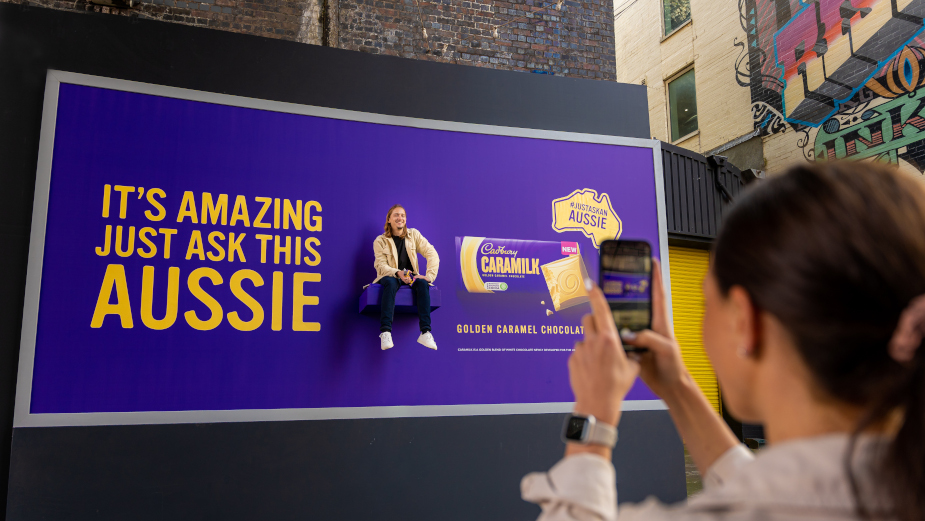 LBB> A person sitting on an interactive billboard is an out-of-the-box concept. How did the idea come about? What was the initial conversation?

Jonny> When we were briefed to launch Caramilk in the UK, we were immediately intrigued by how much love there is for Caramilk Down Under. Aussies were hoarding Caramilk, flogging it on eBay for hundreds of pounds, and it was even being rationed in shops.
We developed the ‘Just Ask an Aussie’ campaign so that we could use these ready-made Caramilk megafans as our spokespeople in the UK. But we didn’t just want to stop there. We wanted to give those Brits who didn’t have an Aussie mate the chance to ask one for themselves. That’s where the idea came from to stick a real-life Aussie on a billboard. So that anyone walking by could stop and ask an Aussie for themselves what the fuss is all about.

LBB> The man answering the questions is clearly a Caramilk megafan. How did you find him and what was his reaction to taking part?

Jonny> Casting was so important for this. We needed a charismatic, Caramilk enthusiast from Down Under who was willing to put himself out there - literally - to answer Brits’ questions. Peter from Adelaide fit the bill perfectly - he was willing to do just that and even asked to be partially paid in Caramilk.

LBB> The billboard obviously had to support an entire person sitting on it. How did you go about creating it?

Jonny> We worked with Kreate to build the billboard. We needed to make sure that it was creatively eye-catching but also safe for our Aussie.

LBB> We know that the billboards featured in London, Manchester and Birmingham. What were the reactions of people who saw them?

Jonny> Surprise. Always, surprise. Plus a lot of questions about how he got up there. People are used to billboards but no one is used to a person stuck to a billboard.

LBB> What was the best reaction you’ve heard of / seen when people hear Caramilk is now in the UK?

Jonny> The best reaction is always when we hear that people have asked their Aussie friends about it. That’s the beauty of the campaign, we have hundreds of thousands of readymade Caramilk fans in the UK spreading the word for us.

LBB> What has the social media response been like and what were some of the questions you got for the Instagram Q&A session?

Jonny> Much like people’s reactions on the street, people following along on social media have been more than a bit surprised to see a real person on a billboard. The Aussie got some hard-hitting questions - from ‘Caramilk vs Aussie BBQ?’ to ‘can you bake with it?’ There were also some kind souls out there who asked how the Aussie was doing up on the billboard and one who asked ‘how are you getting down from there lol?’ David ‘Sideman’ Whitely also caused quite a stir when he posted from the billboard and called Peter a ‘human sticky note’.

LBB> How have the Caramilk bars been received by the British population? Are the Brits going to give it a cult following like the Aussies?

Jonny> There are already some serious Caramilk fans in the UK. They’re giving the Aussies a run for their money.

LBB> Were there any unexpected moments or challenges that you’d like to tell us about?

Jonny> Launching a new golden caramel chocolate in the UK market naturally resulted in a Caramilk vs Caramac debate that got so wild that it trended on Twitter. Even Richard Osman got involved.

LBB> Where is the campaign heading next? Will we see any more billboards?

Jonny> We may have a little something with a certain Australian sports team in the pipeline.