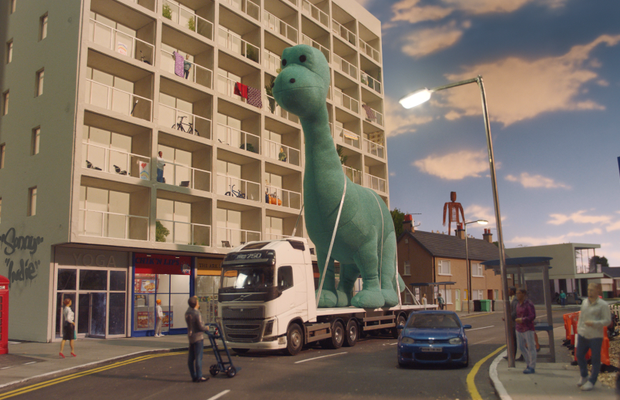 Following its appointment at the end of 2020, Creature London has launched its first TV campaign for life insurance company, Beagle Street.

The campaign, which goes live today (14.01) across TV, VOD, radio and social media, also premieres the brand’s new positioning, Insurance for Life, as well as a new visual identity.

Creature worked with Agile Film director Noah Harris, to create a world that shows just how wonderfully rich our lives are, from the feeling of owning your first home to the all-new responsibilities parenthood brings.

Noah Harris adds: “In the final throes of making these films, it became apparent that one of the creators had the word ‘QUICHE’ tattooed on his arm. A discussion ascertained that this was no hipster ironicism, but a leftfield (and obviously permanent) celebration of his grandmother’s culinary skills. That’s the kind of thinking that went into these films. A joyously fun celebration of Britishness through the prism of the model village, a loving recreation of the world we live in, in miniature.

And although the stories and characters are wonderfully larger than life, everything was created in miniature, with characters and models developed by renowned model maker Andy Gent, best known for his work on Wes Anderson’s Isle of Dogs.

Creature has created two 30 second DRTV ads, alongside the 60’ brand film, featuring momentous, yet relatable, moments in people’s lives, frozen in time and narrated by a rhyming voiceover. The films show us how life insurance can help provide people with the peace of mind to focus on what really matters.

Sarah Martin, associate director of marketing and distribution at Beagle Street, expands: “At Beagle Street, we believe it is about the hundreds of thousands of day-to-day (largely very messy and chaotic!) moments which make the lives we live so rewarding and enjoyable. This campaign is the start of the next phase of our mission to make life insurance more accessible, by reminding consumers that we all live a life worth insuring.  It’s been an absolute pleasure working with Creature to bring our Beagle Street world to life, in such amazing miniature detail!”

The work also signals the launch of an updated Beagle Street visual brand identity. With a new logo and graphic toolkit, the work aims to align Beagle Street’s visual presence with the contemporary and relatable world created with the new films.

Ben Middleton, chief creative officer at Creature, continues: “This work has been a joy to create from start to finish, which was helpful when the team found themselves shooting on Christmas Eve. We can't wait to see the brave new world we've created with our partners at Beagle Street come to life; and start to cement the brands role in its customers lives. We've also got a strong new identity to boot that will help to build both brand awareness and equity at an important time in its business”

The new positioning, ‘Insurance for Life’, will be used as the creative platform for Beagle Street as it enters a new period in the business’s history, driving continued growth and brand awareness as it enters the intermediary market.