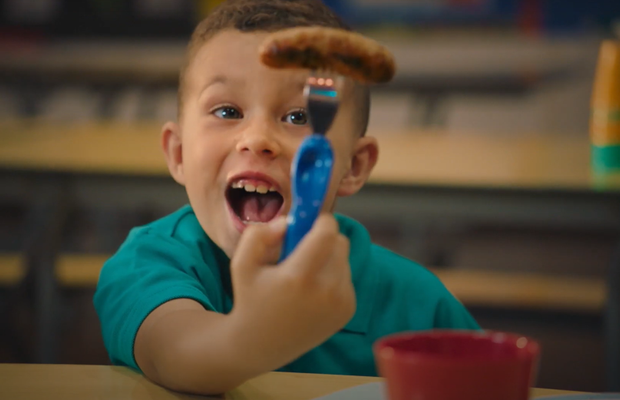 Culinary stars and food campaigners including Prue Leith and Tom Kerridge are backing a campaign to highlight the importance of quality school meals, as part of the UK-wide Chefs in Schools initiative.

Chefs in Schools partnered with BBH London to develop a platform idea and new brand world which speaks to the organisation’s key audiences of parents, teachers and politicians. The new tone of voice and visual identity embody a revolutionary tone, demanding to be heard in a playful, positive manner.

The campaign centres on a new film, created by BBH, which is fronted by children who want us all to “give a sausage” about what’s on their lunch plates, because “feeding us well at school feeds a better future.”

Filmed in a London primary school, the ad features a series of kids laying out the facts about school meals. It starts with a boy saying “Nobody gives a sausage about what I eat at school” because “everyone thinks the whole school meals thing was fixed ages ago.”

It turns out that “so many school lunches are still stuck in the turkey dinosaur age and it’s feeding unhealthy futures.” But there is hope: “These people called Chefs in Schools give a sausage, and want you to give a sausage too. To put proper meals on lunch plates across the country because feeding us well at school feeds a better future. That’s why kids like us need Chefs in Schools.” 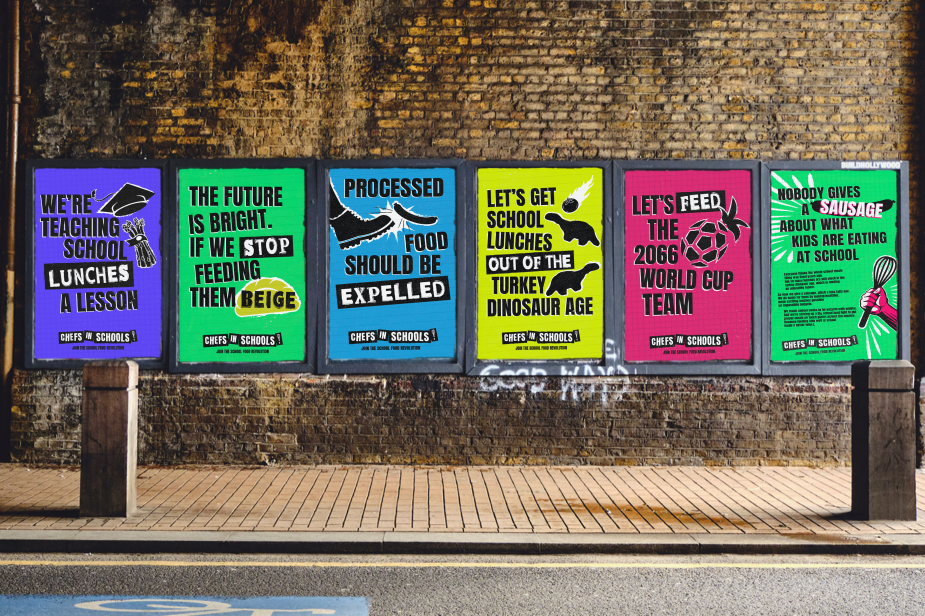 The pandemic put school food in the spotlight when parents shared images of the food their children were being sent to eat at home. This campaign wants people to continue the conversation about the importance of good food being served in schools, challenging the UK to take action to make sure every child can access a quality school meal.

Karen Martin, CEO of BBH London, said: “Chefs in Schools is an incredible organisation and it’s been a pleasure to partner with them in their mission to make healthy food accessible to all. My own daughters are at a school that works with Chefs in Schools and I have seen first hand the difference it makes to serve nutritious lunches that keep everyone happy.”

Tom Kerridge, who is also co-founder of Full Time Meals with Marcus Rashford, said: “This is a cause close to my heart. It’s heartbreaking to think that 4.2 million children in the UK are living in poverty, no child should go to bed hungry but far too many do. Serving good food in schools is vital if we want children to learn and reach their potential.”

Alongside the film, BBH has created a series of print executions that will feature in OOH sites in London & Manchester, in space which has been donated by street advertising specialists, JACK and City Outdoor Media. The campaign will also be running on Social Media and will be fronted by chefs, food producers and influencers such as Tom Kerridge, Prue Leith, Chantelle Nicholson, Amelia Freer and Thomasina Miers.

BBH’s campaign aims to raise awareness of the charity, asking people to donate, write to their MPs, and speak constructively to schools about how to make lunches as healthy as possible. It also encourages schools to sign up to a School Food Charter, which is a commitment to serving freshly made, high quality school meals.

Chefs in Schools was co-founded by Henry Dimbleby, the author of the National Food Strategy and the entrepreneur behind the Leon restaurant chain. He is working with chefs including Tom Kerridge, Prue Leith, Yotam Ottolenghi and Thomasina Miers to promote the charity, which is also backed by food partners including Dishoom, Wahaca, Moro, Smokestak, Ottolenghi and The River Café.

Henry Dimbleby, co-founder of Chefs in Schools and author of the National Food Strategy, said: “We have an obesity crisis in this country, although you can’t fix everything with school food, you have such a vital time to intervene in how children interact with food so if you can teach them through the food they eat in the dining hall, you have an opportunity to shape their eating habits for life.

“In many school kitchens there are staff interested in food who want to cook it - we’re saying to schools - sign up to the charter and give your kitchen teams the training and freedom to make great school food from scratch that will fuel the future well.”