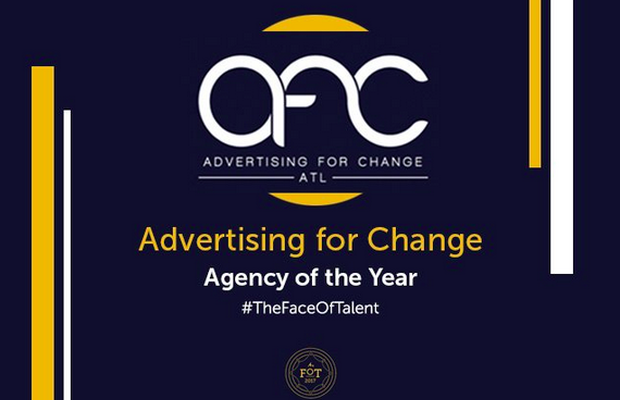 This week at the 4A’s The Face of Talent Diversity Luncheon, Advertising For Change, Atlanta’s diversity and inclusion coalition, extended one summer intern an identical job offer from each of the four founding agencies: 22squared, Fitzgerald & Co., Moxie and J. Walter Thompson Atlanta. Live on stage, Lisa Marie Rainford, a 2017 University of Georgia graduate, accepted an offer as a junior strategist with Fitzgerald & Co.

“It was truly difficult for the AFC Board of Directors to choose an MVP out of this talented group,” said Matt Woehrmann, CEO, Fitzgerald & Co. “Lisa was respected by her peers and supervisors, and she impressed everyone she worked with. I was extremely flattered that Lisa decided to join our team at Fitzco in her dramatic moment on stage. Bigger picture, we’re adding great multicultural talent to the Atlanta advertising industry, which is a primary goal of this organisation.”

Advertising For Change also received the MAIP Agency of the Year Award: a standout recognition for the coalition that launched in March of this year.

“It was such an honor for Advertising For Change to be welcomed and supported by the diversity and inclusion community,” said Spence Kramer, CEO, J. Walter Thompson Atlanta, “and winning MAIP’s Agency of the Year award only makes the experience and the future of AFC that much sweeter.”

The Face of Talent marked the culmination of the first Advertising For Change Internship Program, where 10 interns, selected through MAIP, were given the opportunity to experience four agencies in one summer. To the AFC board, showcasing the collective strength of the Atlanta advertising industry would support its goal of attracting, mentoring and retaining the best talent from all over the world.

In addition to responsibilities from MAIP and their respective agencies, AFC interns were divided into two groups to develop a campaign for a local non-profit supporting homeless LGBTQ youth in Atlanta, Lost-n-Found Youth. The teams pitched directly to the client before heading to The Face of Talent week, and the winning campaign will be produced pro bono. The presentations also served as a final consideration for the AFC Award Recipient.

"We couldn't be more pleased with the success of the AFC / MAIP partnership in its first year,” said Brandon Murphy, President, 22squared. “We are excited about the power of this collective agency group to drive change in our industry."

Between now and the 2018 internship program, Advertising For Change will continue to build opportunities for diverse advertising and marketing professionals through advertising courses, portfolio reviews and career fairs. To keep up with AFC initiatives, please visit advertisingforchange.org.

“The One Consistent Theme Has Been to Focus on the User”: App Creation in 2020