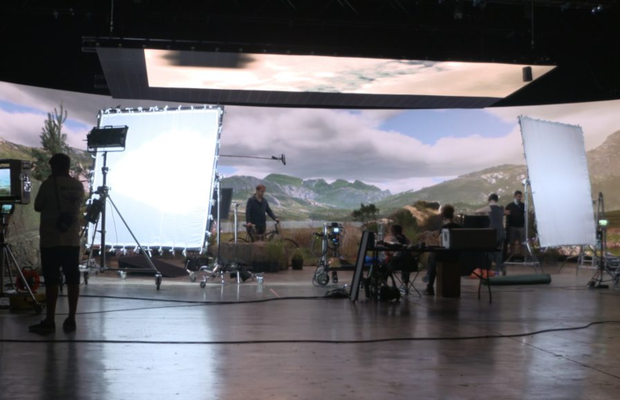 There were very few upsides from the pandemic and the on/off lockdowns, but at least the environment got a very quick breather while everyone stayed at home and tried to figure out how to do their jobs without travelling.
After a brief flurry of panic, we learnt how to adapt and proved how resilient we can be when backed into a corner. Remote shooting, safeguarding crews and a host of other initiatives became the norm and will be for quite a while yet. I think it’s safe to say the days of large crews and agencies on long overseas trips are a thing of the past.
But one greener trend is unfortunately offset by another and that’s a significant rise in the number of productions shooting overseas, especially in Eastern Europe. You can’t really blame anyone, it’s cheaper and there’s supply issues at home in almost every area.
As travel easily makes up the biggest slice of the carbon pie, this is going to be one of the biggest challenges facing our industry as we aim to neutralise our carbon footprint.
To illustrate just how significant the problem is we recently compared the carbon footprint of a virtual shoot against the same shoot produced on location.  The actual film was shot on our virtual stage, at Garden Studios in London, and then we worked out a hypothetical location shoot scenario where we estimated the number of days/crew/props etc., which was then verified by independent producers. We used the Albert/AdGreen Carbon Calculator which was all certified by them. We shot 10 interior and exterior scenes, which took two days on our virtual stage using CG backgrounds compared to the equivalent location shoot that would have taken five days, including one overseas shoot day.
The virtual shoot created 0.74 tonnes of CO2, compared to 94.82 tonnes for the location shoot or less than 1%. That’s nearly 130 times the amount of carbon produced.
I’m not going to argue this comparison was an exact science, but it certainly highlights a big challenge and not surprisingly travel was by far the main offender accounting for over 90% of the location shoot emissions compared to less than 25%.
Now I’m not some kind of travel luddite, I appreciate overseas shooting is integral to the creativity and success of our industry but sooner rather than later we need to be looking into more drastic solutions than simply swapping over to biodegradable cutlery. Brands and agencies are already laying down their green commitments, with a general rule of thumb being carbon neutral operationally by 2025 and within their whole supply chain by 2030.
With production being the biggest carbon offender on the agency supply chain, guess who will be in the crosshairs first?  If they want to keep their brands on side and achieve accolades like B- Corp status they need to sort out the ‘production problem’ and we need to talk about the travel.
I don’t think it will be long before advertising follows in the footsteps of the broadcasters who mandate all production budgets are accompanied by a carbon impact assessment.
Remote shooting will continue to grow and can offer some excellent options without anyone needing to board a flight, however as with many climate challenges I think the most promising solutions ultimately lie with technology.
There are small tweaks like switching your gennies to solar power and then there are large ones like fundamentally re assessing how you produce your shoot. This is one of the reasons I think virtual production/ICVFX will play a big role in the future of industry.
For a start with VP, it’s very easy to measure and control your carbon footprint.  Our figures for our shoot were very accurate. We can monitor the exact amount of power we use, plus it all comes from green sources. Fortunately, the LED volumes are incredibly energy efficient, and these can provide up to 90% of the lighting required on any given scene, so the offsetting costs are minimal.
But this obviously counts for little if creatively it’s not up to the mark and that is where our old friend technology comes into the fray again. Take exterior environments for example (a good reason to travel aboard in the first place). Traditionally creating nature scenes in CG has been tricky and expensive. But this is changing, thanks to photogrammetry, mega scanning, and game engine technology. James Frost’s new promo for Rufus Du Sol is a great example of this – he didn’t get on a plane, in fact he probably didn’t leave his bedroom!
In a few months Unreal will bring out UE 5 and this promises to take another gigantic leap forward for CG photo realistic environments. Don’t ask me how they do it (something about micro polygons, real time illuminations…snooze!) but it looks bloody amazing and soon you will be able to buy almost any environment you want off a CG stock library.
But finally, I think the most important role technology will play is an indirect one, it will bring down the cost of virtual production so it’s not just on a par but it’s less than shooting in some of these overseas production hubs.
Let’s be honest, despite all our well-meaning intentions, sustainability only works when it’s affordable. Look no further than the organic food shelf in the supermarket to prove this point. Our industry is no different, so the green option needs to be competitive financially.
And this is (another) reason why I’m optimistic about the future, virtual production is already competitive and will continue to only get more efficient financially, while at the same time expanding its creative boundaries.
It’s not the only solution but it’s certainly one of them and at the moment we need solutions, and we need them quickly.

More from Quite Brilliant

Can You Spot CG? Spec Ad Demonstrates the Power of Virtual Production