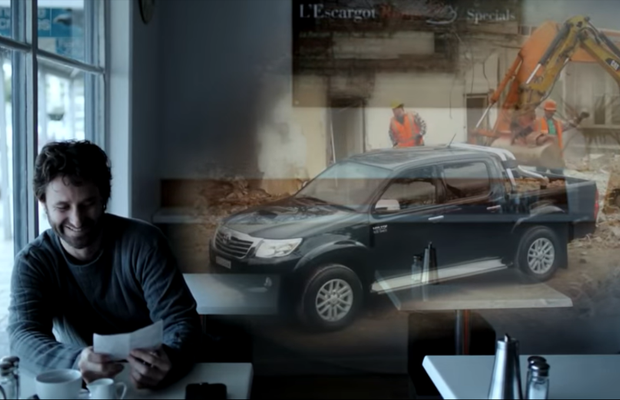 Nothing says nostalgia more than re-watching a clip on the TV that struck you as so relevant at some point in your youth. And, being in the creative business now seemed as good a time as any to ask a handful of Australian creatives to take us back to their younger days with the adverts that stood out to them then, and still do today.

Sorbent Toilet Paper
This sorbent ad from my childhood reminds me that whether it’s 1990 or 2019, lack of access to toilet paper really is the end of the world.

Triple M – FM 105
Lots of ads back in the ‘80s and ‘90s skipped creativity and short-cutted to rhyme and jingle to worm their way into our memories. This ad for Triple M however I remember for just being so damn cool. Instead of telling me about the presenters, the shows, or even featuring a famous rock song, they just made me feel something about them. And I believe that’s what great brand advertising is all about. The production was ahead of its time too.

Toyota Hilux Australia – Unbreakable
You can’t break an unbreakable Hilux. This ad was amongst many that cemented ‘unbreakable’ in the minds of Australia’s tradies. It’s got everything – passion, tragedy, product demonstrations, flashbacks and a happy ending.
Yellow Pages – Not Happy Jan
This ad proves that even the most mundane brief can result in the most brilliant of ads.  The expression, “Not happy, Jan,” has been with us since 2002.
World Series Cricket – C’mon Aussie C’mon
1979. Mojo’s C’mon Aussie C’mon campaign hit the airwaves and fuelled Australia’s passion for sport. 30 years on, we still sing it at the cricket.

Bigpond – The Great Wall of China
Emperor Nasi Goreng was an instant classic. And of course they built the Great Wall to keep rabbits out. This would have been a lot of fun to write! And in a world before Google and smartphones had taken over, Dad's word was gospel right?
Carlton Draught – The Big Ad
It’s a big ad. Very bid ad. It’s just so freak…ing HUGE! What an ad this was, and what an ear worm too! That song lives rent free in my head, and I’m ok with that.

Stainmaster – Mr Hart
This has been an interesting trip down memory lane. It’s fair to say that some of the ads I vaguely remembered fondly gave me a little cringe on reviewing a few decades on. There’s even a couple moments in the spots that have little red flags about them, but if we can view through the lens of nostalgia rather than inspiration then I think that’s a better place to start. A positive theme though is simplicity in the story telling and that’s timeless.
I remember this ad so vividly from when I was young which is the mark of a good ad. It’s a simple demonstration and isn’t very progressive in today’s terms but it’s the mad mutterings of Pro Hart I really like. It’s joyous as he throws wine about, shoots a cake and drives belly first through a trail of spaghetti to create something that’d probably be worth a fortune now, only for his housekeeper to ‘wreck’ it in the name of cleanliness. Like “not happy Jan” the memorable trigger is a quick phrase “Oh Mr Hart, what a mess” nothing much too it really but that. Didn’t need anything more.
AIDS – Grim Reaper
Want to scare the shit out of a kid of the ‘80s? Make them watch this. Grim Reaper was an absolute breakthrough of the time I reckon. It was the advertising equivalent of someone jumping out of the cupboard and screaming in your face nestled in between Cottee’s cordial ads and Life-Be-In-It commercials. We hadn’t seen anything like it and it took our innocence away. And whilst the effects are pretty hilarious now there’s something about the ‘schlockiness’ of it that I think would get social traction now.

Australian Army Reserve – Do Something For Yourself
I remember it quite vividly. Returning home from primary school one afternoon, sometime in the mid-‘80s, and hearing Tchaikovsky’s ‘1812 Overture’ being delivered by a chorus of whistles, coming from the family TV. It was a commercial for the Australian Army Reserve, inspiring Australians to ‘Do something for yourself’. By the time it had played out, I was awestruck. I couldn’t get the images of Blackhawks and tanks and canon and soldiers in jungle greens out of my young mind. I proceeded to drive my mum crazy by trying to whistle the catchy ‘jingle’ ad nauseam. And, I remember waiting by the TV every subsequent afternoon, in the hope that the ad would come on again. Turns out I wasn’t the only one. Crawling around like commandos became the thing to do in the playground for months afterwards, successfully usurping the yo-yo and marble crazes that had occupied us during these far simpler times. I never became a soldier, of course. Knowledge of the realities, doused the flames of my imagination soon enough. But, I did become more aware of advertising. And, in hindsight, learnt my first important lesson about the power of communication, when it dares to stir and inspire, rather than merely inform.

The Yellow Pages – Go Go Mobile
This ad tickled our whole nation. It celebrated our differences, and had everybody in my schoolyard imitating an aging Scottish mechanic.

AFL – I’d Like to See That
I was a big AFL fan, but until this ad, the game felt very niche and small to me. After all, it’s only played here. Also, growing up in Sydney where NRL and rugby union dominated, the AFL felt even smaller. Seeing these global celebrity athletes talking about our game with such awe and admiration immediately made the game feel big, which filled me with pride. But it also did a great job of positioning the game and its players on a pedestal. These superstars would like to see that, and we can see it, live even, whenever we wanted. The campaign continued for a number of years, with the AFL’s centenary TVC featuring not just athletes, but the biggest names of the day, including Heather Locklear and George Burns. Not bad for a little Aussie game.

Solo – Solo man
What is this man doing in the wilderness? Why doesn’t he just walk down to the river and then get in the canoe? Did that landing hurt his back? If he’s so thirsty, why does he decide to pour most of the refreshing drink onto his chest instead of into his mouth? I really don't know. But for some reason, a long time ago this ad was permanently branded onto my cerebral cortex. And forever more I will randomly think about that laughing parrot.