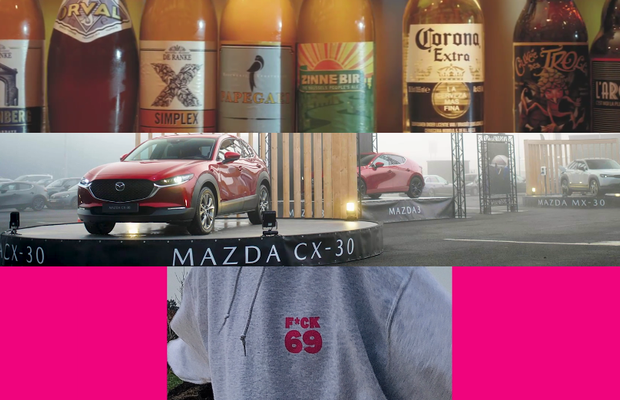 “I think trying to innovate and be original is what links every Wunderman Thompson Belgium campaign. Because we strongly believe in the strength of creativity as well as the potential economic benefit of a creative campaign,” says Wunderman Thompson Belgium creative director Manuel Ostyn. He’s got nothing against a solid TVC or poster campaign of course, but they’re unlikely to be what excites him and his agency most. “Carefully executed classic campaigns might result in a safe outcome. But a carefully executed creative campaign might result in a super outcome.”
But while it’s fair to say the Covid-19 pandemic put something of a spanner in the works of creative advertising, the crisis - if it’s not totally crass to say - did present some creative opportunities. Having seen three intriguing Belgian solutions to the many problems coronavirus caused, LBB’s Alex Reeves asked Manuel to talk us through them.

Purposeful thinking is already a trend in campaigns. And because of Covid that got a huge boost because every brand had something that they could help out with. Like Café Solidair for Maes, which is a beer brand in Belgium.
Nobody really knew how long it would take and what the impact would be. So we started proactively thinking about it ourselves. The problem that came up in the media was that a lot of bars would be closed and a lot of bars don't have a big profit margin. That meant that even a few weeks or months of closure would mean bankruptcy. As a big brewery, Maes wanted to do something and there was also the fact that they were dependent on their bar owners. So our little team came together, we came up with an idea and Maes immediately understood that this was something they needed to do.
We came up with the idea by asking if there was a way we could help them bridge this gap. And it was a tangible monetary system that helped them do this. Along the way, we saw a lot of clever and cool ideas that did nothing more than just explain to everybody that bars were struggling because of the lockdown. But we already knew that. It was in the news constantly and of course we knew because we couldn't go to the bar ourselves. So we really wanted to make a difference and create something that not only created awareness, but would also be a solution to help those bars.
We had to do it very fast because the bars were struggling. It was working within a few days of the official announcement from the governments that closed bars. It was definitely a challenge but a worthwhile one. It's a nice advantage that we have here at Wunderman Thompson Antwerp. The fact that we were able to produce such a platform pretty easily was super nice. However, the back end was pretty difficult to manage because it had to be really quick. It had to be monitored all the time. There were a few people at the agency that monitored everything and made sure that every transaction got to the correct bartender. But that's crisis communication.
We did a lot via social media. We actually created a simple social media mechanic where bar owners could create posts and ask their followers for support. It worked because a lot of bar owners have their own on Facebook pages with followers. Those posts really got the ball rolling because people started tagging their friends who they'd normally go to the bar with. Also, a lot of people just started buying beers without the intention of even redeeming the coupon afterward. They just wanted to show their support. It was nice to see.
The bartender in the case movie really was at the point of closing her bar. A year earlier her husband had died and she was already thinking about whether she should keep the bar. But she’d decided to keep going after the death of her husband. Then lockdown hit and she was really struggling. She was really thinking about quitting. But then she received both amazing financial and moral support and she realised that a lot of people were actually getting a great deal out of her bar. They were really glad to go there. For a lot of people it was a nice place to be and an important part of their lives. That really helped her and made her decide the bar is actually more than just a bar and income, it's actually a very valuable thing. And that gave her a lot of energy and purpose. She actually started crying when she was talking about the support she got. So it was pretty cool to see that an idea could have such a human impact.
Every bar in Belgium has a brewery that they are linked to. There are a lot of Maes cafes in Belgium that have a contract with Maes brewery for the delivery of their pils. Smaller bar owners have created good warm bonds and connections with Maes and they are very important for Maes as well. When we first locked down our first intention was that we needed to help no matter what. But at the same time, it was also a very good B2B campaign and it helped Maes sell more beers. So it was really a win-win.
Afterwards when this campaign got some PR, others did the same thing. So it's very nice to see that it really created concrete, tangible impacts.

Mazda in Belgium isn't a brand with a huge media budget. Compared to a lot of the competitors in Belgium, we always have to make do with a lot of media presence. So this was a good way to create a win-win situation because we knew everybody would have some kind of virtual motor show, digital motor show or online motor show. But, the thing with the other brands having their virtual motor shows with their larger production budgets is that they're all the same - their work isn't really inspired. So we said "if everyone is talking about safety bubbles, is a car not the safest bubble you can be in?” So why not create a motor show that you can just drive through, watch the event and experience the cars?
It was very different compared to just reading some facts on a website. Getting a good, three-dimensional feeling for a car and what it looks like is why people go to motor shows or showrooms. People like the experience.
What I like most about is that we were really able to be creative with the budget. Despite the media pressure we have in Belgium for a brand like Mazda, we were really able to think flexibly and the client was also on board to combine all the budgetary needs. And from the one activation we could create our online campaign, we could create our outdoor campaign and we even created our TV commercials. I'm proud that we could make something like this work.
Our first video campaign was outdoors in front of the motor show. We used 3D visuals of what the motor show would look like because the production company needed renders to make it realistic. So we communicated up front. We sent out emails to potential clients and car salespeople, telling them to invite people to the event. And then at the events, we filmed our after movie but we made it a bit more high-end so we could also re-cut it into a TV commercial. This way, we got a lot more attention because it was very special.
That was one of the reasons why we thought it would work. Especially back then, people were really bored to death and even a trip to this drive-thru motor show was worthwhile. We also purposely chose to do it in the parking lot of a big commercial complex. There was an IKEA there, so there was a lot of traffic there. Driving out of the parking lot, you could easily pass through our drive-thru motor show. So it was just a fun extra thing for people to use to take their minds off of their boredom. A chance to do something spontaneous.

We have a heritage - a good five or six years - of powerful campaigns with Child Focus, a non-profit we work with. They're very enthusiastic and pleased with our work, so they put us into contact with Awel, another non-profit that's linked with a Child Focus. We were able to do this campaign with the funding of the Belgian and Flemish governments.
The reason we chose this approach with F*CK 69 is that in those times we could all use a laugh, especially our youth.
Youngsters urgently had to know about the existence of the Awel helpline because research showed that 69% of them were not feeling well mentally. That’s some shocking data. But also a number that speaks to the imagination, especially with youngsters.
In this case the data/numbers were ideal to build our creative idea on. Once we had our F*CK 69 tagline it reminded us of the awful, but very popular ‘90s fashion trend. You know, the flashy shirts with ‘De Puta Madre 69’ on them. So we decided it was time for an ironic revival. Youngsters are always receptive to new fashion statements, and in this case it was a statement close to their heart.
The fact that our most famous virologist, Marc Van Ranst, became somewhat of a popular ‘rebel’ in an ironic way in Belgium made him the ideal hero for our youth.
Especially because he became famous for wearing the same kind of boring V-neck sweater every single day. Only changing the colour every now and then.
Belgians mostly are creatures of habit. So, as we expected, they had difficulties coping with this sudden change. And social media exploded with questions. Desperately looking for an explanation. An explanation that we were more than willing to give off course.
And youngsters, well they love irony. So an older authoritarian scientist in a flashy pink sweater with F*CK 69 on it in the news really tickled their fancy. It didn’t take long before Awel had to open a webshop for the sweaters due to popular demand.
The topic finally got the attention it deserved, even in the televised National Security Updates. Because up until then they were only focusing on the closing of the bars and restaurants and the impact on the economy.
Youngsters found their way to the Awel helpline, which registered a massive increase in calls.