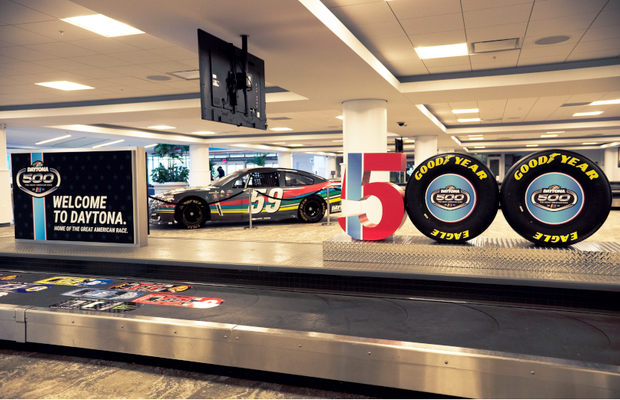 Marketing agency St. John has designed and implemented a unique takeover of Daytona Beach International Airport for client NASCAR to welcome visitors to this year’s Daytona 500 race. The highlight was a depiction of the race on baggage carousels.
NASCAR wanted to create a welcoming environment at the airport for arriving fans and capture media attention much like a city hosting the Super Bowl might do. So, with three weeks turnaround, St. John created about a dozen eye-catching installations at the airport to convey the magnitude of the event to guests as soon as they arrived in Daytona Beach.
One ingenious installation generated the most interest: St. John transformed the airport’s baggage carousels into mini, moving racetracks for NASCAR by simply adding race car decals to the conveyor belts.
“We pushed ourselves to come up with something as unique and captivating as the DAYTONA 500 itself,” said Peter Herbst, VP, executive creative director at St. John. “Having a moving ‘track’ to work with, we just had to figure out a way to stage a race on it.”
As mentioned, the baggage carousel races are part of a larger takeover of the airport, which includes such elements as DAYTONA 500 branded wraps, floor graphics and banners throughout the terminal, a start / finish line across the passenger drop-off and pick-up lane, and custom-made DAYTONA 500 tire art installations. The effort is part of a larger community-based initiative to welcome race fans to Daytona Beach to celebrate the DAYTONA 500.
“The DAYTONA 500 is the biggest race in motorsports,” said Chip Wile, Daytona International Speedway president. “As soon as you step off the plane, you are immediately immersed in the energy and aura that is synonymous with the Great American Race.”
The partners worked with local government, community organisations and local businesses to expand the presence of and excitement for the DAYTONA 500 beyond the track, allowing participating members to celebrate the Great American Race and engage race fans in unique ways under a cohesive theme. The Daytona 500 is a 500-mile-long NASCAR Cup Series motor race held annually at Daytona International Speedway in Daytona Beach, Florida. The race was held on 14th February 2021.