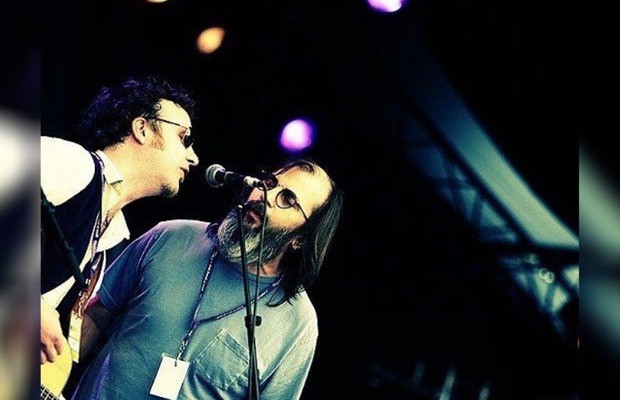 In the Company of Huskies' Client Services Director Sarah Deeny is a self-professed lucky woman. Her creative hero is also her husband - multi-platinum record selling Irish singer songwriter and independent record label owner Mundy.
If you're not an Irish native you will still likely have heard Mundy's songs. Mundy has released eight albums covering Rock, Americana, and Folk. He has enjoyed gold and multi-platinum record sales in Ireland and has toured around the world including the UK, Europe, Asia, Australia, the USA & Canada. He has supported legendary acts  like Bob Dylan, Neil Young, Lucinda Williams, Emmylou Harris, REM, and the White Stripes, to name a few and his song 'To You I Bestow' is even on the official soundtrack for Baz Luhrmann's iconic adaption of Romeo+Juliet starring Leonardo Di Caprio and Claire Danes.
We speak to Sarah to find out what its like living with your hero...

Can you tell us more about your choice of creative hero?

Sarah Deeny> A career in Advertising spanning over 20 years has given me the pleasure to work with some great creative minds – too numerous to mention individually. As an account person, I worked alongside my creative partners in developing iconic campaigns for the likes of Guinness, Heinz, BMW, and Allianz.
Being part of the cut and thrust of getting strong ideas made, is one of the many reasons I love the industry. But when it came to nominating one individual, I landed much closer to home. With the decimation of the live music business globally, I have been inspired by how Mundy has delved deep to release his creative energy through new channels and new forms of expression finding new audiences along the way. Singer songwriter Mundy is my creative hero.

When did you two first meet?

Sarah> I met Mundy in January 2006 on a ski trip in Austria. We had mutual friends but had never crossed paths before. At that time, he was a well-known musician in Ireland but not being from a musical background or indeed having a strong interest in music, I had never heard of him or any of his songs. We bonded over a mutual love of books and word play, and by the end of the holiday having listened to a number of his hits, I realised I did know him after all.

How did you get to know more about Mundy's work and how did his career progress?

Sarah> Self-taught, Mundy started out as a busker, has played alongside Bob Dylan and even for Barack and Michelle Obama in The White House. After his second album, he has gone from being let go by Sony Music to setting up his own label, being his own manager, designing his own merchandise, and making his own videos.

How is he such an inspiration to you and your work at Huskies?

Sarah> Mundy is stubborn, passionate, and most of all relentless. He sits with his work, tweaks, noodles and goes back to the drawing board until he is 100% satisfied that it is the best it can be.
Listening to how Mundy thinks about ideas has inspired my creative judgement. He has taught me to follow my own thoughts, feelings and gut. This has helped enormously in assessing creative work. I have also learnt to keep my own personal taste and bias out of the equation. Seeing first-hand how difficult it is to hear and receive creative feedback has meant that I take the time to think through what is lurking behind my initial impression. Thoughtful feedback is really important.
I love creativity in all its guises, but my default position would be a more linear approach. Mundy has inspired me to delve deeper for the less direct, more magical, and crazy ideas.

What song of Mundy's do you keep coming back to and why?

Sarah> Whether in his writing or his art, he has a unique ability to deliver both the bold and the subtle in equally detailed profundity. He has a unique way of writing that simplifies the world we live in. There are a few lyrics that never fail to stop me in my tracks.
‘To you I bestow’ was on Baz Lurhman’s soundtrack to Romeo and Juliet
Well you may not see me when you come back
I could be sharing someone else's pillow
And my love for you is better than diamonds
To you, everything I bestow
One of his songs Linchpin is about mental health struggles:
‘It's got to end now it has gone way too far
The sparkle robber overdosed in his car
They found a note that he left on the ground
It said yours was the strongest sparkle that he'd ever found’

Apache Pizza Triples the Excitement of a Takeout