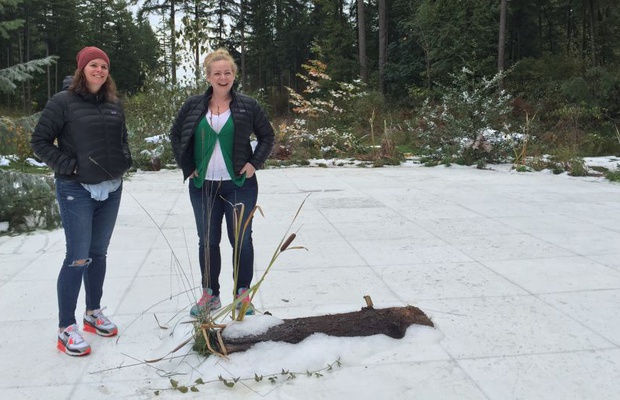 Erin Wendel and Lauren McCrindle are a team of group creative directors working in New York by way of Minneapolis, Prague and Toronto. After teaming up on university assignments in Toronto, the pair have gone on to spend the past 15 years working on and leading accounts for national, pan-European and global clients spanning everything from chocolate and video games to diapers and laundry detergent. They’ve upped sticks and navigated moves together to Prague (after getting a touch sidetracked en route to New Zealand) and Minneapolis (after clearly missing their intended stop in Amsterdam).
Nowadays they’re plying their trade as group creative directors at McCann New York, still going strong as a creative team. LBB’s Addison Capper picked Erin and Lauren’s brains on the foundations of their creative relationship, the intricacies of keeping it strong through job and life moves, and the place of the creative partnership in 2020 advertising.

LBB> You've been creative partners since (I think) 2005! To kick things off, how did the two of you meet? Did you know each other prior to your first gig or were you placed together there?

Erin and Lauren> We met at Humber College in Toronto. And were paired up for a class and quickly realised that if we worked together, we could do our individual assignments better and faster. Guess, we’ve been gaming the system from day one. Though it turned out that we lived in the same neighborhood. So, we might have just been lazy. We finished school with the same portfolio and got our first job together. And every one since.

LBB> What are the most prominent memories from those early days of your career? What did you learn that has stuck with you over the years?

Erin and Lauren> So much. Honestly, it’s crazy how formative those early years are. We think about it now when we hire junior teams right out of school. One day, they’ll be reminiscing about their crazy bosses who made them adjust the kerning on a headline 10 times or write 200 headlines to get to one good one, too! That’s how we came up. You’ve got to be proactive and take initiative. In advertising, good things rarely come to those who wait. You gotta make it happen.

LBB> What was the first project that you worked on? What can you remember of it?

Erin and Lauren> That’s a good question. Our very first job was at Grip Limited in Toronto. We did a lot of newspaper retail ads for Acura and tent cards and shelf talkers for Labatt beer. We also spent months on the agency Christmas Card (remember when those were the biggest deal?).

LBB> You ventured to Prague to work at Lowe for a couple of years. What tempted you to eastern Europe? And how did you find the experience?

Erin and Lauren> It’s kind of a funny story…we were actually trying to get to Australia or New Zealand. And ended up in Prague. We like to think we made it halfway there. We had itchy feet and were eager to see the world. And landed at a Czech agency that had mostly pan-European and Global clients. It certainly wasn’t without its challenges, but it was like 10 years of experience crammed into two. We met a bunch of awesome people, traveled all over and learned a ton.

LBB> 15 years is a long time for a creative duo to be together, especially as you move from city to city and country to country together! What is it about your relationship that has kept it fruitful over that time?

Erin and Lauren> So far, we’ve always wanted the same things. And had the same career goals. There were a few times when we almost split up because we wanted to live in different places, but some solution or compromise always presented itself.
It’s really important to find a partner that you can work with, that you can disagree and even fight with but are always on the same page about what you’re trying to achieve. It also helps to find someone with the same level on the should-I-sell-everything-I-own-and-move-halfway-around-the-world-or-stay-in-the-same-city-forever scale as you.

LBB> Thinking pragmatically, how do you go about navigating those big moves? I’ve moved to a different country before and there’s a lot to consider, so I wondered how you navigate that as a duo?

Erin and Lauren> Neither of us are planners. Each time, it just kind of happened. In fact, after a couple years in Prague we thought we’d go to Amsterdam and ended up in Minneapolis, Minnesota! After that we stopped trying to go anywhere. And that’s when we ended up in New York. If we had overthought any of it, we never would have left Canada in the first place. Or our hometowns.
It also helps to get hired before you go, so you have help with logistics like visas, moving, etc. Most people don’t realise how relatively easy it is to work abroad in advertising.

LBB> Creative partnerships are not what they once were and their part as a mainstay of the ad industry is not as certain as it was 15 years ago. What are your thoughts on the concept in the 2020 ad industry?

Erin and Lauren> We have friends who have worked together for years. And our CCOs have been a team for 20-something years. Maybe, we’re all old, but it doesn’t seem that strange to us. Even as the industry strives to become more agile and diverse, there’s still a place for collaboration and partnership. Perhaps even more so. The roles within teams are just becoming less rigid and defined, which is cool.

LBB> You're both creative directors now - how do you work together to nurture the best work out of your teams?

Erin and Lauren> We try to review our teams’ creative work together as much as possible. Sometimes there’s just too much going on and we have to split it up, but we find it really helpful to give teams both of our perspectives. We hope that it helps show them that they should really be working together as a team. Coming up with ideas together. Discussing what works and what doesn’t. Pushing each other. And not always agreeing on everything. Writing and art directing are skills and it’s important to have those, but neither of them are going to do you much good if you can’t come up with a good idea.. And those are sooooooo much easier to come up with and so much better when you’re working together.

LBB> Which projects from your time at McCann have you been most proud of and why?

Erin and Lauren> One of the first things we did when we got to McCann was to develop a new creative platform for Lysol. They had a really smart and interesting strategic idea and it was really fun and rewarding to bring to life with the Protect Like A Mother campaign. We had a great group of teams working with us and were able to make something that resonated with people in a very real and personal way. We also really love the Go Finding platform we won the HomeGoods account with. It was one of those experiences where you just know deep down that your idea is the right idea for the brand. And when they saw it they knew it too. It’s been a really fertile campaign and a really fruitful relationship. We have some new work in the campaign coming out over the next year that’s we’re really excited to see push the idea even further.

LBB> How have you navigated your partnership during lockdown?

Erin and Lauren> Like everyone else, it’s a lot of Teams calls. And Zooms. And phone calls. And socially distanced walks. And over the last few months we’ve been in each other's ‘bubbles’ so we get together to work sometimes. And we currently live eight blocks apart so it isn’t too far to lug a couple of bottles of wine.