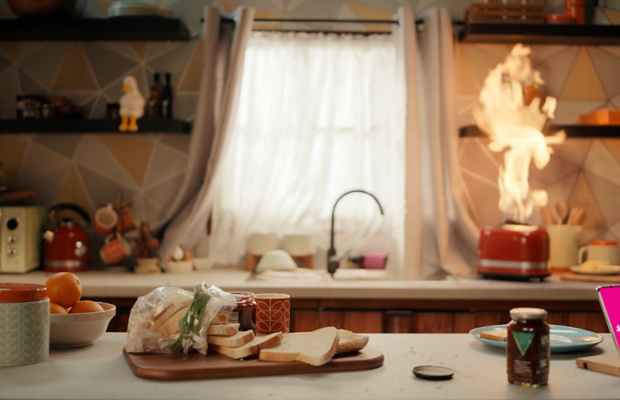 UNIT9 has made a new spot for Lemonade, a US Insurance company. This the first of a set of three tv spots. The ad was made directly with the brand.

Lemonade is aimed at a slightly younger market who uses apps for everything. They are known for being simple, modern and digital. And this is what UNIT9 wanted to convey in the ads.

Cole Paviour, UNIT9 director explains: “This one was fast and furious! Three 30 second spots to shoot in a day, and a shoot to turn around in a little over a week - time was against us, so we had to hit the ground running! Luckily, the scripts were lighthearted and clean, and spearheaded by the fab creative team at Lemonade, who were incredibly collaborative and supportive.

We got to defy Mommy again and play with fire. Which is always a hoot! The crew at MatterFX rigged our tumultuous toaster with a gas fuelled flame bar that turned all the way up to 11 - to really allow that baby to become a siren screamer!

Our gorgeous sets were designed by the dexterous hands of Charlie Whiteway (PD) and his team, and given some fizz, pop and sparkle by lighting magician Carl Burke (DP). My Covid-restricted hugs and snogs to a team of absolute troopers, who stayed super focused throughout, even as we galloped forth into the wee hours!”

The ads are running on US TV from now, with two others to come out soon.