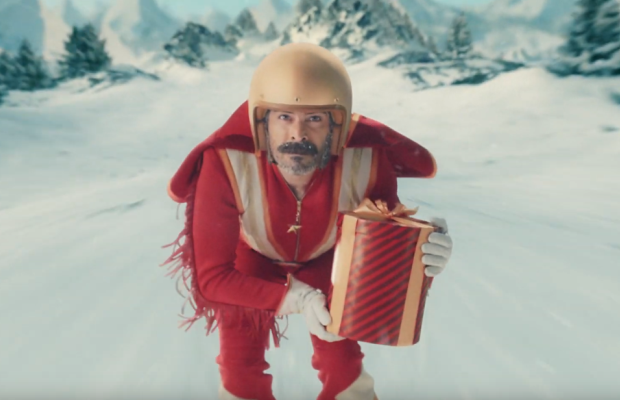 This year it’s all about turning off the gifting auto pilot and gifting more adventurously - thanks to TK Maxx - as shown in the off-price retailer’s latest festive campaign.
The campaign, created by Wieden+Kennedy London, launches on TV in the UK on the 12th November, in 40, 30 and 20 second slots, with a longer 60 second version running online. It features a daredevil gifter, affectionately known as “TK”, who is on a very specific mission: to gift like he’s never gifted before. Sick and tired of the same old gifts from the same old shops, the festive hero skis off-piste on an alpine adventure in Gift Different, the latest iteration of the brand’s Ridiculous Possibilities platform.
Somesuch’s Sam Hibbard directed the ad, putting a mountainous spin on the colourful cinematic style TK Maxx is known for. Kerry Shale narrates the journey and delivers the daredevil’s tongue-in-cheek inner monologue. The end of the ad and the brand’s ‘Gift Different’ message is delivered by the renowned Christmas voice of Bill Nighy. The soundtrack is Maurice Ravel’s “Boléro”, famous for accompanying Torvill and Dean’s iconic figure skating performance in the 1984 Olympics. The DOP was Rob Hardy, of Ex Machina fame.
The spot encourages shoppers to shake off the shopping autopilot so many of us get stuck in each year, and delve into the unpredictable world of TK Maxx. The daredevil skier TK is determined to find gifts to make friends and family go “Oooooah” and “Ahhhh” and leave them with grins so big they hurt! Even if it means navigating an icy mountain-top lake and an implausibly large log.
The advert ends on TK’s final mighty jump – skiing into a cosy winter chalet where his family awaits. A surprising selection of gifts ranging from oversized soft toys to designer handbags to record players, and even a crab bell, end up in the hands of delighted family members.
Deborah Dolce, Group Brand & Marketing Director at TK Maxx says, “Our advert taps into something we know a lot of people dread; giving or receiving dull or predictable gifts. This Christmas we celebrate the “Ridiculous Possibilities” world of TK Maxx and the exciting collection of gifting treasures to be found. The ad is a humorous metaphor encouraging people to take a more daring route to finding more exciting Christmas presents.
"Our TK character puts the fun and adventure back into Christmas shopping, showing that you can find unique and special gifts with us we hope he will raise some smiles along the way too.”
Hollie Walker, Creative Director at Wieden+Kennedy London, adds, "Who needs Santa when you've got our hero TK? - Our lycra-clad gifting daredevil. A man on a mission to get us all to shake off that Christmas shopping stupor, go a little 'off-piste' and give them something that blows whatever they were expecting right out the water."
The Christmas campaign will run in the UK, Ireland, Germany, Poland, Austria, and the Netherlands, combining ATL with print, digital, social and PR to create a fully festive, integrated, through-the-line campaign.
The campaign creative, TVC production and digital assets have been created by Wieden+Kennedy London. Ogilvy is the PR and influence agency and Mindshare is the media agency. The in-store, online and social creative will be delivered by TK Maxx’s in-house Creative Team.