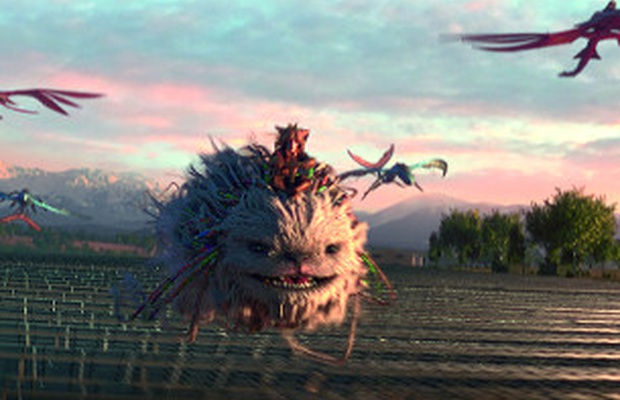 'The Race', is a fantastical roller coaster of a ride featuring characters on imaginary mounts, flying at full speed above villages, forests and fields – but also above solar panels, hydroelectric dams, wind farms and nuclear power plants. Shot from start to finish in full 3D, and set to a French song (“Mon truc à plumes” by Zizi Jeanmaire), this exhilarating journey, brilliantly produced and shockingly stopped short by an unexpected scene of everyday life, is the cornerstone of EDF’s upcoming advertising campaign launching  on September 17th 2017 on TV, digital media, cinema and social media.
Directed by Thierry Poiraud (Insurrection) with creative direction from Christophe Coffre (Havas Paris), this thrilling commercial with ultra-realistic pictures (Mathematic) and set to unexpected music (HCRLS) raises a very serious issue, namely the energy mix or how EDF manages to generate 97 per cent of its electricity with zero CO2 emissions from a diverse and competitive mix of nuclear, hydro, wind, solar and thermal energy sources at a time when the entire French population has begun to worry about energy production.
“Our low-carbon electricity sets your pulses racing”
This is because the mad race turns out to be a video game which a father and his children are forced to stop halfway through. And the show doesn’t just stop there. Our heroes in this commercial, which has a selection of endings that change over several months, fly with joyful abandon over EDF’s production sites in identical manner every time.
Christophe Coffre, Havas Paris Chief Creative Officer, said: “This commercial bears out how EDF’s production methods are akin to how French people consume electricity in a fanciful and, to my mind, celebratory way. It is entertainment with a clever mix of poetry, excitement and humour, representing a timeless, multigenerational and historic brand that is French consumers’ number one choice and at the cutting edge of technology.”
Edouard Dorbais, Copywriter, and Rémi Arnaud, Havas Paris Artistic Director, added: “To demonstrate the energy mix, what better way than to depict a modern life-like scene with high-tech future effects and vintage music to create a popular culture film about a subject which concerns us all”.
Julien Villeret, EDF communications director, said: “With ‘The Race’, EDF markets itself firmly in the present and dares to use an entertaining storyline to raise a tricky issue. Having revived the link with French consumers and then won them over, the brand is taking a step towards the future”.
EDF, a popular and friendly brand
In the space of just three years, EDF has turned into a close, friendly, caring and sympathetic brand in tune with the times. The electRIC saga launched in June 2014 kick-started the trend demonstrating that this historic brand could appeal to populist humour and was prepared to tread new ground both on TV and social media (Facebook campaigns with targeted commercial content, and “Aymeric’s Adventures” on Snapchat)  to build customer loyalty. “The Race”, a big-budget commercial, carries on the trend of appealing to as many generations as possible, especially young people, with entertaining and cutting-edge content.