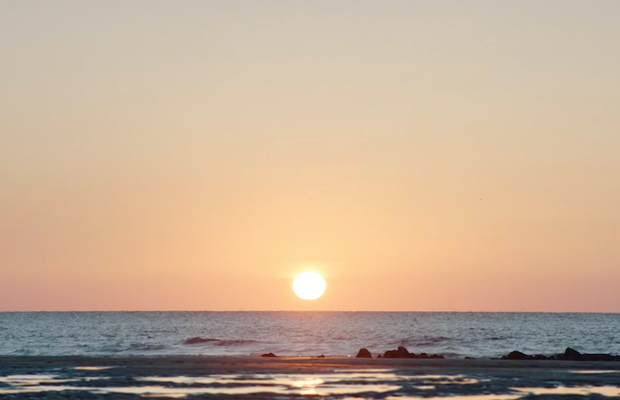 To keep spirits up after seven weeks of confinement, Belgian telecom provider Proximus interrupted national TV to treat all Belgians to a 90-second-long sunset at the seaside. Since the beginning of confinement, Belgians have not been able to visit their favourite place in the country, where so many memories are made. Thanks to Proximus and the ecosystem SILK, they were able to watch the sunset on national television on Thursday evening as a reward for their dedication to staying home.
This initiative by Proximus was developed by the ecosystem SILK, led by creative agency FamousGrey, digital agency Prophets and media agency Maxus, and is part of the #NoLimitsAtHome campaign, which encourages Belgians to think beyond the limits of their home. The idea was immediately supported by DPG Media and IP, two of Belgium’s biggest media companies. Visit Oostende also contributed to the video by facilitating filming the sunset.
Around 9pm on Thursday 30th of April, programs on Belgians biggest commercial channels RTL and VTM were interrupted to broadcast the sunset at the Belgian coast. The 90 seconds of pure zen were also shown on Facebook and Instagram live. This way, a great number of Belgians were reached with this magical moment. Of course, this was an emotional moment as Belgians from all generations made beautiful memories there. Now that they can’t visit to make new ones, they miss their beloved coast. Proximus wanted to encourage them this way to 'hang in there'.
"These are very challenging times for both agencies and brands. It’s not about waiting till this is over, it’s about rethinking everything. We all have to go faster for one thing, but luckily there is also a bigger sense of solidarity. This willingness to collaborate is exactly what made this idea possible." says Peter Ampe, creative director at FamousGrey.
Proximus already motivated Belgians to share their creative endeavours at home with the campaign and online platform #NoLimitsAtHome. Homes were being transformed into yoga studios, concert halls and classrooms. Proximus took things a step further by bringing the famous sunset at the Belgian coast into people’s living rooms and proved yet again that there truly are no limits at home during confinement. From now on, homes are also a beach bar and a seaside apartment.

With the collaboration of: Sean D’hondt

The Rise of Three-Dimensional Ideas

Could This Book Mean the End of Terrible Case Study Films?