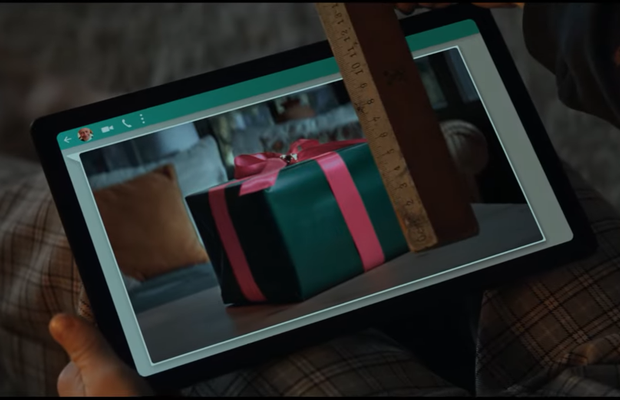 What does every child think of when they hear ‘Christmas’? Presents, of course! Deutsche Telekom and DDB Budapest decided to play on this idea in their Christmas campaign and gave us a heartwarming spot, proving we still have real-life connections with the people we care about.
Initially, we’re presented with a young boy who consults his grandfather for a Christmas present that gets increasingly larger. Using his mathematical skills, he eventually decides that the presents go from small, to bigger, to 54cm tall. The grandfather, ever obliging, manages to find a large enough box in the attic and patiently carries it across to his grandson for Christmas. In a surprising twist, the gift wasn’t what you’d expect and instead, we’re left with that familiar ‘warm and fuzzy’ feeling.
LBB’s Nisna Mahtani spoke to campaign director Stina Lütz, DDB Budapest creative director Zsolt Balogh and the creative team, Guilherme Somensato and Mate Nagy, to find out more.

LBB> What was the initial idea and how involved were Deutsche Telekom in creating it?

Guilherme> This has never happened to us before, the script had only one version. We then crafted a detailed animatic and everyone fell in love with it. After that, Deutsche Telekom gave us unbelievable freedom in enriching it with small details when we found our director in Stina Lütz.
Zsolt> I would say DT’s role started with giving a great brief, then they picked the right idea, then they gave their full commitment and support to make it happen. This was true from the local client to the top. Sometimes the hardest part is to not fuck up a great idea. Here we had the best we could wish for to bring the most out of ours.

LBB> There was something so touching about this relationship between the grandpa and grandson, as well as the respective perseverance from both. How did you decide on this being the main storyline?

Guilherme> I believe we had three or four potential storylines (this wasn’t even our favourite), and they all revolved around the special connection grandchildren have with their grandparents. This is the relationship that has suffered the most during the pandemic-torn Christmas last year, and we believed this to be a territory of repressed emotions ready to burst for many of us. Thankfully, the reception shows we were on the right track.

LBB> This campaign highlights the importance of the connection between the younger and elder generations and how this has been lacking during the pandemic. Why was it so important to convey togetherness?

Zsolt> During these last two years, grandparents made extra efforts and managed to find new ways to stay close to their grandchildren by adopting digital technologies. Still, most of them felt their relationship had eroded due to the lack of real-life interactions. We wanted to prove that they don’t have to be afraid, they are still close and all the little clumsy online interactions will pay off when they meet in real life. 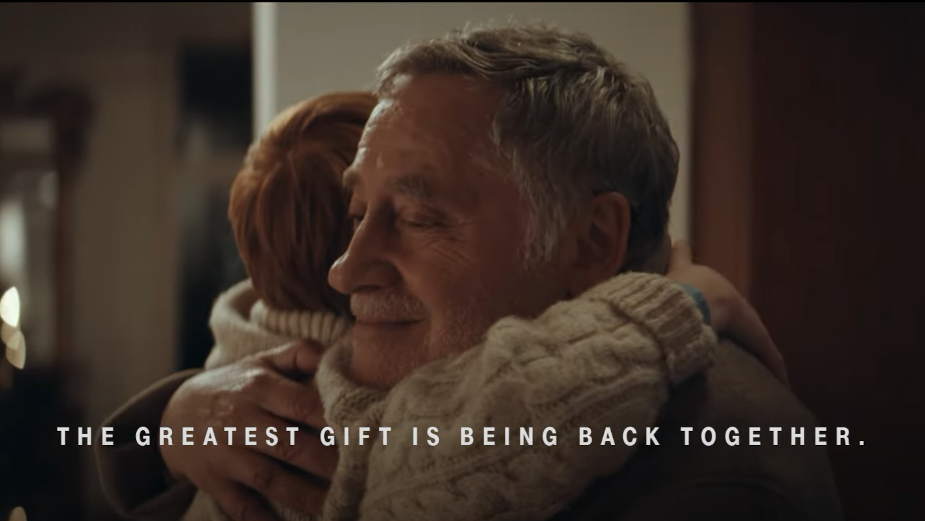 LBB> With very few words spoken, the storyline is still clear and emotive. Can you talk us through any challenges you faced in conveying the message?

Mate> In the script we had a couple of sentences to describe the situation of the family not being able to be together last Christmas. As more and more countries joined the client pool, it became clear that we need to minimize talking in order to avoid the clumsiness of dubbing. What grabbed our attention in our director’s, Stina’s previous work is how masterfully she is able to convey deep emotions, and really complex ideas in a single look or interaction between her characters. We managed to find solutions to make our message clear, with few words spoken.
Stina> I’ve always been interested in the language of human emotion. When I start on a film I think about performance & character. I'm always looking to distil things down to a simple emotion that inevitably is more true without spoken words; the truth and tells the story.

LBB> The campaign certainly feels like Christmas, with the festive lights and dark atmosphere. How did you achieve a balance that was in keeping with the season, but also still feels festive?

Stina> The visual language of Christmas is all about light in the middle of a dark, cold winter. I wanted to create a festive look by combining the contrast of the exterior coldness and interior warmness. And since we wanted an authentic look and feel we used as much naturally existing light and practical ‘Christmas lighting’ as possible.

LBB> This campaign is rolling out in nine countries. Were there any challenges or aspects you kept in mind to keep it relatable across the board?

Zsolt> Actually, it was a process that ended up with nine countries but it all started with Austria. Countries have joined gradually and that made our job even harder.
The project was a unique joint effort of the nine countries. So at the beginning, there was a natural need from the countries to identify the scenes in the story that they can localise to make them look true to their country. For example, to make the train station scene super local, each country would have had their own version of the scene showing their own typical train station.
We knew from the beginning that we had a universal story and we had to look for the similarities between countries, not the differences. Anyway, we had an extremely short time for the development and this would have brought unnecessary complexity to the project. So we went with a universal look to keep the focus on the characters and the emotions. It sounds obvious now, but it was not so easy to sell this approach.
Mate> From casting to location scouting, we had to make sure our story feels local anywhere from the small towns of Austria to the mountains of Montenegro. Our production house, Cinesuper’s research team did a great job in meeting these diverse expectations. And they did it under immense time pressure, since we only had 12 days for the pre-production of this film, as well as for the other eight shorter TVCs that complete our campaign.
Zsolt> Let’s not forget to highlight how lucky we were with the casting. Finding our two main characters that work equally well in each country felt challenging but went surprisingly smoothly.
Stina> One of our main challenges was to make the film work internationally but still feel local and relatable in all the markets. We wanted to avoid dubbing a dialogue and solved it with a voice-over. We also searched all over Hungary in order to find generic but still beautiful interiors and exteriors and spent a lot of time researching festive and beautiful Christmas decorations that felt relatable and authentic for each market. 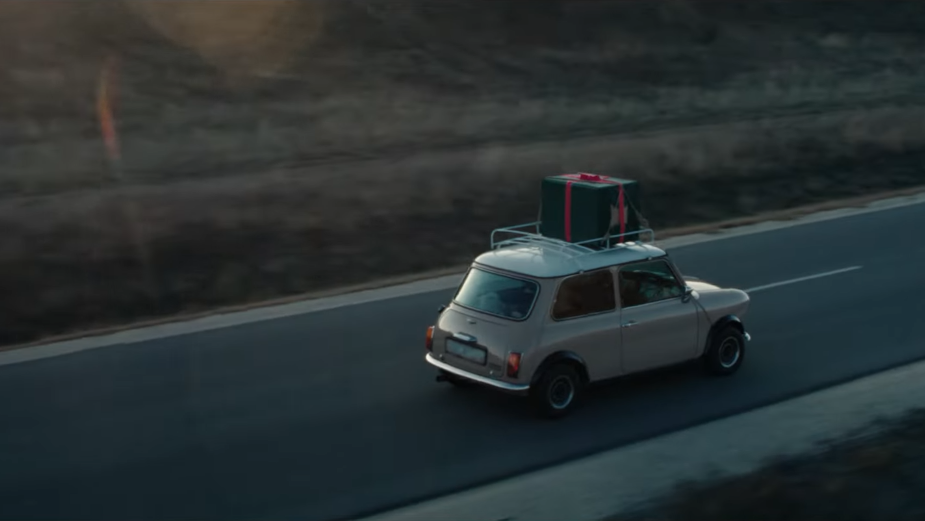 LBB> We’d love to know where the snow globe with the green present is! Can you tell us?

Mate> That snow globe has been the most sought-after set piece we have ever encountered. Currently, it is on its way to the headquarters of Deutsche Telekom in Bonn as a token of gratitude for our pioneering and rewarding collaboration.

LBB> Were there any behind the scenes moments you can tell us about?

Zsolt> The most significant moment must be when our director Stina tested positive for Covid less than 24 hours before the shooting. She showed unbelievable resilience directing and editing the film from a hotel room in Budapest, while the rest of the team kept fine-tuning the process to make her feel as present and in control as possible. These hardships we all shared and brought us really close. We were all there when Stina was freed from her quarantine after 10 days.
Stina> Haha. Well, it was a surreal experience. But totally doable because we all worked so well together during pre-production, had a perfect wifi-connection and a DOP that knows my style and with whom I have a great workflow.

LBB> We’d love to hear about the best reaction to the campaign that you’ve seen or heard?

Guilherme>  Luckily there are thousands of touching comments to read through, in all languages. My personal favourites are the ones where the commenters spontaneously share personal stories of their grandfathers. Proving to Telekom as well, that their efforts of bridging the age gap with their digital solutions is worth continuing.

Mate> Merry Christmas to everyone!

“Disruptors at Heart”: How DDB FTW’s Creativity Is in the Game, around the Game, and of the Game