The two films from The Marketing Store and UNIT9 feature diverse talent including the multi-talented Harry Pinero, rapper Sam Wise, and DJ and Producer Cuppy, as well as rappers Aitch and Dutchavelli 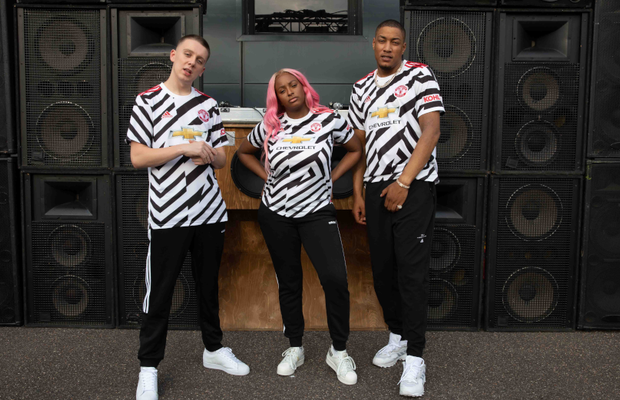 Today, adidas announce the release of the Manchester United third shirt with two online films from The Marketing Store and UNIT9.

Created by The Marketing Store and produced by UNIT9, the films feature diverse talent including Harry Pinero, Aitch and Sam Wise, among others.

The Manchester United Third shirt is a gamechanger, with a hacked, striped design that is intentionally divisive. The films aims to reinforce this idea by demonstrating that when you think differently, you get different results.

The first film features an exchange between the rappers Dutchavelli and Aitch next to a food truck, as they explain the idea behind the third shirt’s design. With some choppy cuts and blast from the past footage, rapper Aitch takes us on a swift journey through the creative process behind the new shirt using the food truck as an analogy, with humorous interjections from fellow rapper Dutchavelli.

The first film ran on adidas’s channels. The second ran on the artists.

Tom Brown, director said: "To bring this larger than life kit to the screen was a huge project especially whilst adapting to new COVID shooting rules. The first time I saw that mash up of zig zagging lightning bolts and stripes, I knew it would require something slightly surreal, with a unique on-screen language to launch it into the world.

Early on, we decided to lean into the adidas design ethos of taking heritage concepts, cutting them up and reassembling them with a new flavour. We made the line 'hacked and modernised' our mantra and the 'remix' style was echoed through everything from the whip pan dialogue to the camera movement and VFX.

Our talent also added to this look and feel, providing pinball-fast comedic back and forth scenes that created the breakbeat rhythms that underpin each spot.

Getting to orchestrate so many different artists and personalities in one place was pretty amazing and felt like our underlying concept writ large. Just like the creators of the kit —we took lots of incredible talents and threw them together in off kilter way and created something big, fun and totally unpredictable. I can't wait for people to see it.”

More from The Marketing Store